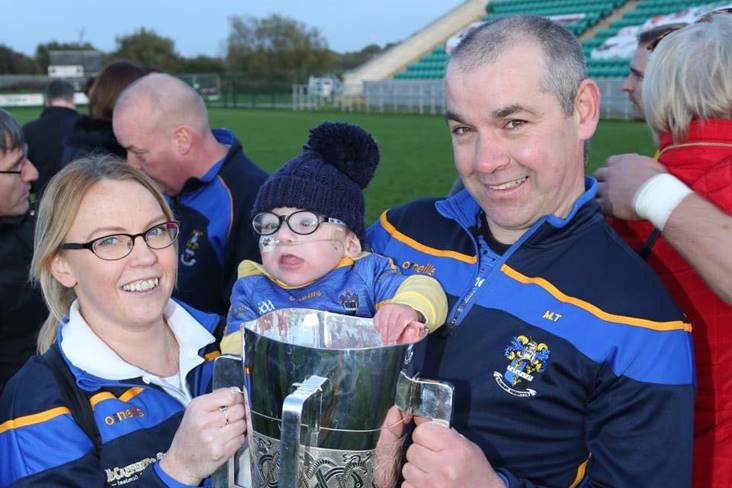 Seanin and Mark Traynor with their young son Oisín after a Robert Emmetts win.

A GAA family in Armagh are hoping to raise much-needed funds for their young son who suffers from quadriplegic cerebral palsy.

On May 27, 2018, Ballymacnab boy Oisín Traynor was born at 25 weeks, weighing 950 grams. His mum Seanin developed sepsis and was rushed for an emergency C-section, a day they both came close to losing their lives.

Oisín spent the first 7 months of his life in NICU. After multiple surgeries, his parents, Seanin and Mark, received the worst news possible, their baby boy would not make it home but Oisín defied the doctor's odds.

Now, just weeks from his 3rd birthday, Oisín continues to face new challenges on a daily basis with difficulties with muscle control, balance and coordination. He is unable to crawl, stand or walk and is completely tube fed.

Oisín's parents Seanin and Mark - two stalwarts of the Robert Emmetts club in London, have launched 'Opening Oisín's Opportunities', a fundraising campaign to provide him with the specialist equipment and therapies he needs to help him reach his full potential.

"Oisín is now almost 3 years old and a real life little miracle with the most infectious smile. He has been through so much in his short life, spending the first 7 months in NICU where he had some major ups and downs," the Just4Children fundraiser reads.

"We now know that Oisín has quadriplegic cerebral palsy among other conditions. This means he has difficulties with muscle control, balance and coordination, so simple things such as sitting without support is extremely difficult. He is unable to crawl, stand or walk and is completely tube fed. He is incredibly determined and tries so hard every day to learn these things.

"Essentially Oisín has the potential IF we put in enough early intervention but sadly the NHS cant provide what he needs. So, we are fundraising for Just4Children to provide Oisín with the specialist equipment and therapies he needs to help him reach his full potential."

If you would like to donate to 'Opening Oisín's Opportunities', you can do so here.