Cavan made it back-to-back Ulster senior football championship wins over Monaghan after Raymond Galligan's last-gasp free saw them come out on top in a cracking derby this afternoon at a blustery Clones.

The Breffni men trailed the hotly-fancied hosts by seven points at the half but dug deep with the wind at their backs in the second-half and it was Gerry Smith’s score in third minute of injury-time that forced extra time.

Monaghan would be reduced to 14 men eight minutes into the extra periods and saw a two-point lead wiped out once Martin Reilly hit the Farney net.

The Blues’ sensational comeback looked to be spoiled when Rory Beggan’s free had the derby going to penalties, but Galligan came up trumps for Mickey Graham’s men right at the death as they marched onto a quarter-final date with Antrim next weekend.

Gearoid McKiernan opened the visitors’ account after four minutes with a point which was backed up by James Smith a minute later.

Micheál Bannigan posted the Farney response before Cavan hit the jackpot with a rocket shot to the net from Oisin Pierson on eight minutes to surge themselves four in front.

The hosts responded brilliantly to the goal concession however, sailing over the next four scores with the stiff breeze at their backs.

Livewire Conor McCarthy grabbed two of them either side of a Stephen O’Hanlon point ahead of Ryan McAnespie squaring matters (0-5 to 1-2) before the water break.

McManus (free) nudged Seamus McEnaney’s charges in front for the first time on 16 minutes and his second free would have them two to the good after Stephen Smith and Bannigan traded points.

Dermot Malone entered the fray for leaders on 27 minutes as they went on to finish the half out in style.

Kieran Duffy’s point opened up a three-point gap and it would be doubled a minute shy of injury-time when McManus got threaded through and held his balance to finish low past Galligan.

It was hammer blow the Breffni men, who might have though they were off the hook after McCarthy rattled Galligan’s crossbar just minutes earlier, as they went on to trail at the break by double scores (1-11 to 1-4) after Fintan Kelly sent over another point.

Cavan didn’t take long to use their wind advantage after the restart, with Oisin Kiernan and impact sub Thomas Galligan firing over points from distance to trim down their side’s deficit.

Ryan Wylie cut through to set-up Kelly for his second point of the afternoon but it would cancelled out by Luke Fortune a minute later, with the Cavan Gaels defender floating over a sweet score from all of 50 metres before hitting the deck.

Dessie Ward’s point made it 1-13 to 1-7 as the sides took a second water break, with Chris Conroy and Thomas Edward Donohoe coming in to sharpen Cavan’s attack for the last quarter.

Conroy and Stephen Smith saw chances drop wide prior to Fortune and McKiernan points breathing some real life into the Blues just after the hour mark, as they controlled the closing minutes of normal time at St Tiernach’s Park.

Old reliables Martin Reilly and McKiernan ensured to convert the trailers’ lion share of possession and keep the heat on the home side, as two chances at the other end from McManus drifted wide. 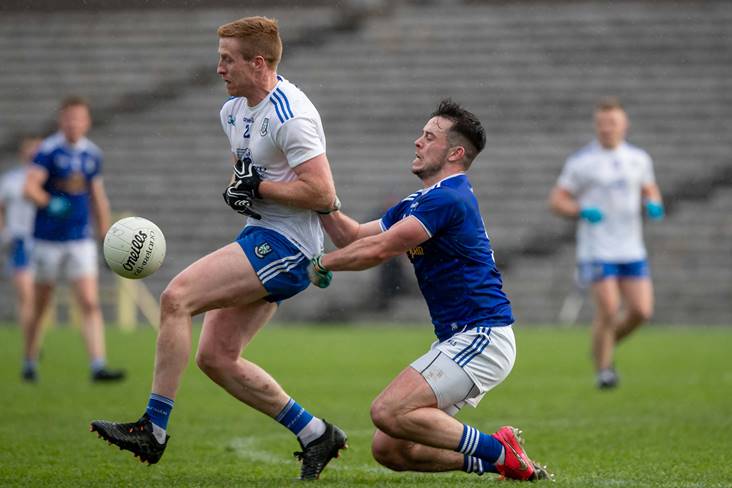 A converted mark from substitute Niall Murray made left the difference at a minimum with four minutes of injury-time left and it’d be Lavey’s Gerry Smith that landed the equaliser.

The wing back held his nerve to split the posts with a perfectly stroked score via the outside of his boot.

McManus would have a chance with a last gasp free earned by sub Christopher McGuinness, but it fell wide much to the relief of the Breffni contingent as this fascinating derby got 20 extra minutes.

Monaghan got the breeze back for first-half of extra time but lost McGuinness to a straight red card eight minutes in prior to subs Colin Walshe and Andrew Woods hitting points that had them 1-15 to 1-13 ahead for the break.

Martin Reilly and Thomas Galligan sent chances wide at the restart but pair would combine to see Cavan take full profit from their next tour on goal.

This time ‘Man of the Match’ Galligan won possession in the left corner-forward position and burned past his man to cross to Reilly and the Killygarry attacker did the rest.

Cavan’s first lead since the opening quarter of an hour would be taken away by a Shane Carey free but they’d have it back once Conroy sailed over a ‘45’ with two minutes remaining.

Monaghan pushed forward in the hunt for an equaliser and they got through ‘keeper Rory Beggan (free) in the second minute of injury-time, but his opposing number one would go one better.

Thomas Galligan fielded a superb mark at centre-field and drove forward before injuring himself in the process and referee Ciaran Brannigan pulled it back where the Lacken had man originally fetched.

It gave Raymond Galligan the chance to win it for the visitors from all of 55 metres and he floated over superbly to give his side a famous victory and a slot in the last eight of the province against Saffrons next Saturday afternoon.