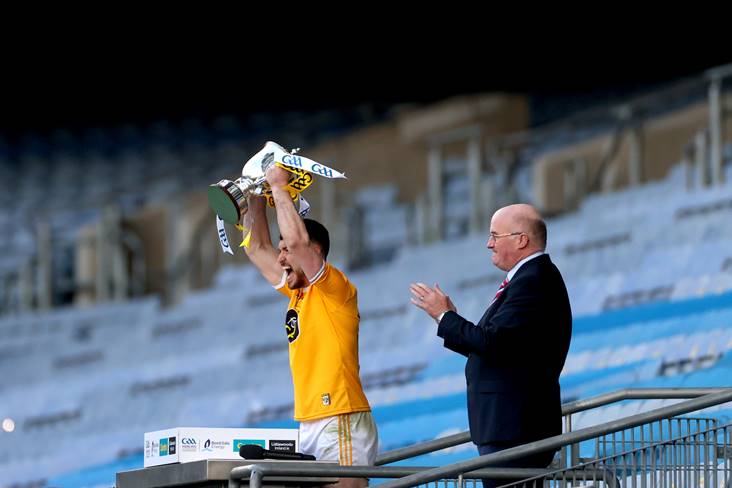 The 2020 GAA/GPA 2020 Joe McDonagh Cup Team of the Year has been announced this afternoon.

Champions Antrim have been honoured with seven positions on the team while runners up Kerry are awarded with five.

Carlow and Westmeath have two and one representatives on the team, respectively.

Antrim went unbeaten five games in the competition, including their hard fought final victory over Kerry, and their marksman Conor McCann, who scored 4-20 throughout the campaign, has been named Joe McDonagh Cup Player of the Year.

GAA president John Horan credited those that were honoured by saying: “These awards give us an opportunity to salute the outstanding performers in what was an excellent Joe McDonagh Cup competition. My congratulations to all of those who have been selected and on behalf of the wider Association thank them for the effort they produced in such difficult circumstances in 2020.”

GPA CEO, Paul Flynn, added: “Congratulations to the 15 players who have been selected for the Joe McDonagh Cup Team of the Year. Your performances marked you out as the best among many outstanding performers in 2020. Congratulations too, to Conor McCann on his fully merited awards. I also want to take this opportunity to thank all the players who competed in the Joe McDonagh Cup last year. The lift you helped give to your counties and to the country in very challenging times should not be forgotten.”

A special programme to honour the GAA/GPA 2020 Joe McDonagh Team of the Year will be featured on RTÉ 2fm’s Game On programme this Wednesday evening from 6pm.

.@AontroimGAA lead the way in the GAA/GPA 2020 Joe McDonagh Cup team of the year with seven players honoured. @Kerry_Official have five representatives on the team, @Carlow_GAA have two, and @westmeath_gaa have one. #GAABelong