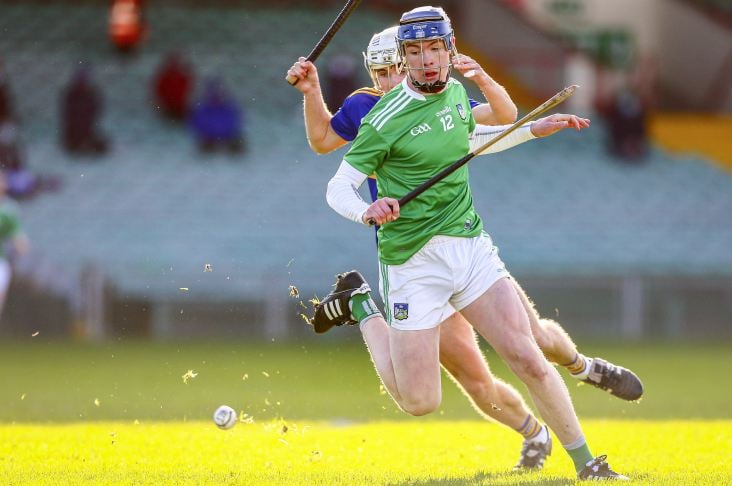 Limerick made it back-to-back Munster minor hurling championship titles after seeing off Tipperary in extra time at the LIT Gaelic Grounds.

Liam Lynch landed 0-10 for the winners while captain Adam English struck 0-5 and Shane O’Brien contributed 0-4 for the Diarmuid Mullins managed side.

English was outstanding over the 80 minutes and set-up what looked like the winning goal by Eoin Harmon towards the end of regulation.

However, Tipperary substitute Kenny Lee landed an injury-time equaliser that left it at 2-14 to 0-20 and in the extra periods the Treaty lads would come up trumps.

It was Tipp that made the better start to this provincial decider with points from Jack Leamy (2) and Sean Kenneally but Limerick were soon level and surged towards a 1-9 to 0-10 half-time lead after Patrick O’Donovan hit the net on 17 minutes.

Three Lynch frees saw the holders maintain the upper hand early in the restart prior to Tipp hitting a purple patch that saw scores from David Fogarty (2), Leamy (2) and Darragh Stakelum.

That had the Premier lads 0-16 to 1-12 ahead by the second water break and they maintained the lead until the 57th minute when sub Harmon hammered home Limerick’s second goal.

Lee kept his cool at the other end to force extra time where Lynch and English came to the fore for the would-be winners, as they took a 2-21 to 0-22 lead at the break before seeing out the three-point victory at the end of the 80 minutes.

The win powers the young Shannonsiders towards an All-Ireland semi-final date against Galway on the weekend of January 2/3.