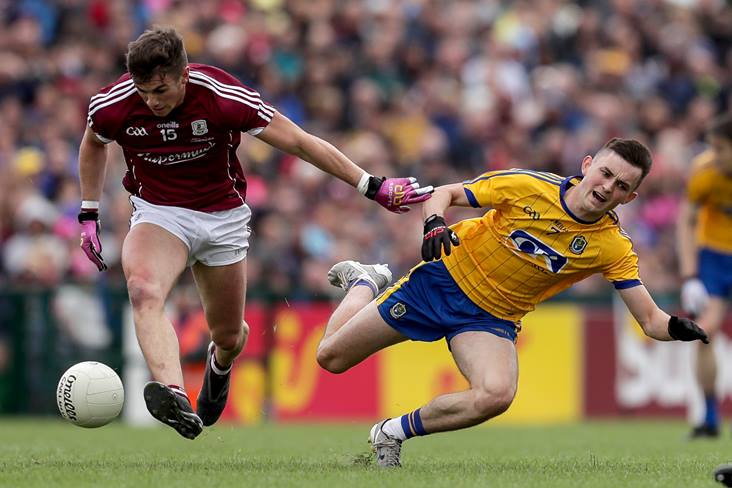 Galway captured the JJ Nestor Cup and a place in the Super 8s as they eventually eased past Roscommon at Dr Hyde Park, 0-16 to 2-6.

Bidding for back-to-back provincial titles, the Rossies went into the second half in a winning position - three to the good and with wind advantaage - but Kevin McStay's men managed just 1-1 from placed balls after the restart as the visitors threw off their defensive shackles to claim their 46th Connacht crown, joining Mayo at the top of the roll of honour.

Shane Walsh was superb for the winners, bagging half of their tally, including five in a row between the 42nd and 58th minutes as they moved ahead for the first time, 0-10 to 1-6, while the Rossies will have another shot at reaching the Super 8s when they enter the Qualifiers at the Roound Four stage.

With Enda Smith impressing, Roscommon were clearly the better team in the first half, despite playing into the teeth of a stiff breeze, and were full value for their three-point interval cushion, 1-5 to 0-5.

Ciarain Murtagh supplied the game's only goal in the 22nd minute when he ran at the packed Galway defence from the left wing and found himself in a one-on-one with Ruairi Lavelle, beating the visiting custodian with an emphatic shot to the bottom left corner to leave five between the teams. Galway had 13 men behind the ball and they all did nothing.

Even though the Tribesmen hit back with an Ian Burke brace, Diarmuid Murtagh's fourth point made it double scores in favour of the holders with seven minutes left before the break, 1-5 to 0-4.

The same player had opened the scoring in the seventh minute and Walsh equalised with a stunning point on the run three minutes later. Murtagh's second and third (free) points had the hosts two ahead after 14 minutes; Smith left three between the sides at the midway stage in the first half.

Walsh's second - another sensational finish - was a rare moment of first-half brilliance from Kevin Walsh's charges, who looked bogged down in defensive tactics when they would surely have been better advised to express themselves. A Walsh free closed the first-half scoring but Galway had little to be pleased about when the short whistle sounded…

Thanks to Walsh (2) - a classy point from play followed by a free - the visitors were only two adrift after 45 minutes, Murtagh's fifth from a soft free that was moved closer to the posts having opened the second-half scoring.

Roscommon racked up a number of bad wides before a brace of Walsh frees had Galway level by the 53rd minute, 0-9 to 1-6 ... four in a row from the Kilkerrin / Clonberne ace!

Eleven minutes from the end. Walsh's free had the away team in front for the first time and Sean Kelly duly doubled the difference. Four minutes later,, Diarmuid Murtagh was bundled over by a couple of Galway defenders and captain Conor Devaney took on the responsibility of taking the resultant penalty, despatching a tremendous shot into the top left corner of the net to edge the losers back in front momentarily.

Substitute Seanie Armstrong pegged the Galway equaliser and team captain Comer, who'd endured a frustrating day prior to then, landed the lead point on 69 minutes before adding his second on the stroke of full time, turning down the chance of a goal to fire his side two ahead, 0-14 to 2-6. Substitute Adrian Varley and Burke completed the winners' scoring.