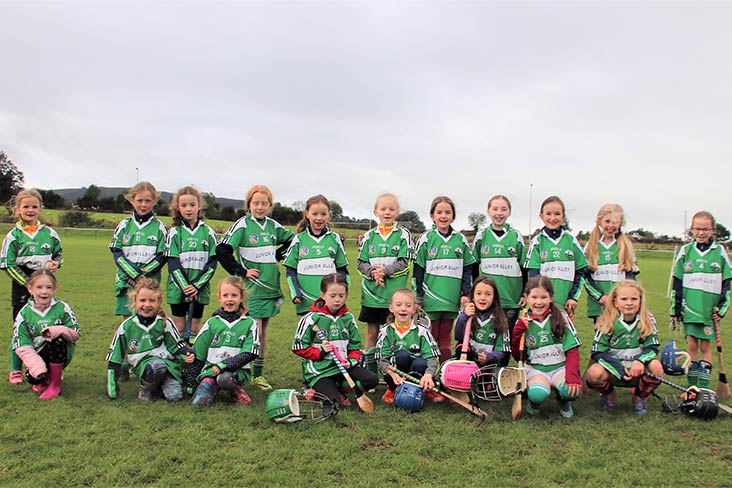 The Kinnitty U9 squad

Saturday morning was a morning when you really knew that Summer was long past and Autumn had arrived.

Cold and wet and certainly not a morning ideal in anyway for our Under 9 girls to play their opening blitz for this year, but that’s what they did as they braved the elements and the club played host to Belmont and Drumcullen.  They games had everything, from great scores to rising and striking the ball, from girls soloing the ball to goalmouth scrambles with coaches and parents willing the ball over the line from the sideline or desperately encouraging the girls to clear it away from the goals.  Well done to everyone who took part and of course to the girls' coaches.

At 4 pm on Saturday afternoon, the weather had taken a complete turn around and our Under 13s played their next match in bright sunshine against St Sinchills.  After the heavy rain that fell during the week and the bottom pitch looking like it could do with a break the match was played on the top pitch which, while it was a lot firmer it is also a good deal wider which added to the challenge for both teams.  This showed on the final scoreboard as the game was low scoring, finishing with a one point win for Kinnitty on a scoreline of 2-0 to 1-2.

While our Under 13s were playing in Kinnitty our Kinnitty/St Sinchills Minor team were in Banagher taking on St Rynaghs in their long awaited opening match of this year’s Championship.  Unfortunately, however it turned out to be a match that the girls would probably rather forget as they suffered a heavy defeat.

Saturday, 9th October at 10 am (tbc), Under 11 blitz against Lusmagh, Kilcormac/Killoughey and St Cillians in Kinnitty GAA Grounds