A FL Div 1 final: Paddy points the way for Skryne 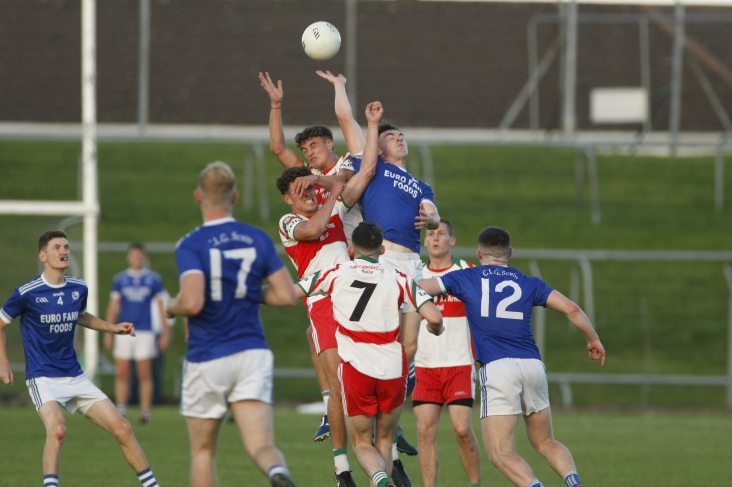 Nine Paddy O'Rourke points set Skryne on their way to a merited A FL Division 1 final win over Gaeil Colmcille at Pairc Tailteann on Saturday evening.

A second quarter scoring burst laid the foundations for this success. Skryne's ability to respond positively to subsequent Gaeil Colmcille rallies ensured that the Packy Mooney Cup would return to its home club.

This game may have lacked the intensity of first game on the card but the closeness of the clash kept the crowd engrossed.

Skryne lost Robbie Clarke to a second yellow card on concession of a penalty at the town goal. Brian Hanlon expertly netted the resultant kick to trim the deficit to the minimum, 0-16 to 1-12.

To their credit Skryne overcame numerical disadvantage to outscore the Kells-men by 0-3 to 0-1 in the time remaining. Paddy O'Rourke posted the last three Skryne scores to bring his tally to nine points.

The winning captain complimented his performance on the pitch with a well-pitched acceptance speech.

The sides are set to return to Pairc Tailteann on Sunday, August 12 in a SFC Group B round four fixture

Having entered the second-half with a 0-10 to 0-8 advantage, Skryne moved three clear by the 40th minute.

Skryne 'keeper Des McAvinney denied Gaeil Colmcille a goal chance with a well judged fly-kick in the 46th minute when just a point separated the sides.

Mark Battersby and Daragh Campion also got off the mark as Skryne moved 0-16 to 0-12 by the 48th minute. Those scores ensured Skryne staved off that late Gaeil Colmcille rally.

Gaeil Colmcille topped the table due to a six-point win at Skryne in the round robin phase. Having fallen behind to Donie Ryan's opening point for the Tara-men, Seamus Mattimoe leveled matters with assistance from Brian Hanlon before taking the lead through Martin Barrett.

Skryne soon tied it up through O'Rourke (45), setting the tone for the opening third of the hour.

The opening 18 minutes were closely contested with the scores level five times. Both sides hit the front, but there was never more than two points in it until Conor O'Brien's 20th minute effort made it 0-7 to 0-5 after a good move.

That was the second of four scores on the spin that swung the game Skryne's way. However, Gaeil Colmcille landed two of the final three scores of the half to be in contention for the Mooney Cup when trailing by 0-8 to 0-10 at the break.

A Brian Hanlon effort left Gaeil Colmcille just 0-8 to 0-10 in arrears at the break and well-placed ahead of the second-half. Their best efforts couldn't secure silverware on this occasion.