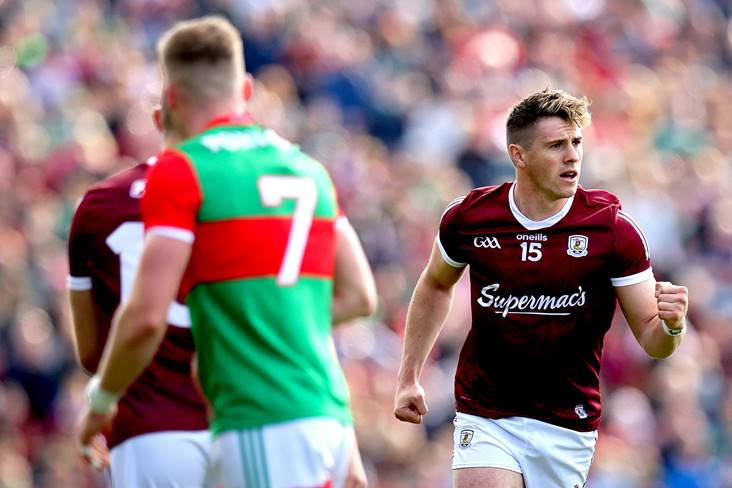 Galway advanced to the Connacht SFC semi-finals following a thrilling 1-14 to 0-16 victory against Mayo at Hastings MacHale Park this afternoon.

The Tribesmen were the better team for long spells, but were left hanging on for dear life after leading by 1-14 to 0-11 with two minutes of normal time remaining, as the holders threw everything at them and came within a point in the end of an absorbing contest in front of a crowd of 24,557.

Padraic Joyce's outfit got off to a good start with a Shane Walsh point 14 seconds in, the championship's all-time scorer Cillian O'Connor, returning after nearly a year through injury, soon levelled matters for Mayo from a free.

Rob Finnerty and Niall Daly edged Galway back to the front before Damien Comer teed up Johnny Heaney for the game's only goal on 6 minutes, they were well worth their early 1-3 to 0-1 lead.

With O'Connor's frees and Ryan O'Donoghue and James Carr also finding their range, Mayo came right back into contention and meant the tie was finely poised at 1-6 to 0-9 heading into the half time break.

On the restart, Ardagh clubman Carr sent James Horan's side to the front for the first and only time, but Galway then enjoyed a dominant period, producing eight of the next nine scores with Kieran Molloy, Walsh (3), Cillian McDaid and Paul Conroy hitting successive points to seize control.

However, the hosts, who lost Oisin Mullin to injury early in the second half, hit a purple patch of their own down the home stretch as the ever green Lee Keegan and substitute Kevin McLoughlin notched points to help bring the margin down to one deep into injury-time.

They had one last chance to bring their neighbours to extra time but Aiden Orme's effort drifted wide.