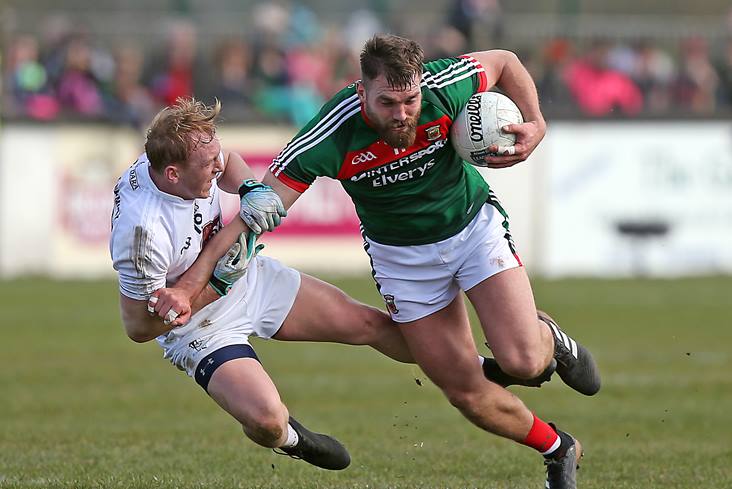 Aidan O'Shea's palmed goal on the stroke of half-time paved the way for a comfortable Mayo victory over Kildare in this Division 1 bottom-of-the-table clash in Newbridge.

While the result eases Mayo's relegation worries, it pushes Kildare a step closer to a return to Division 2. The Lilywhites remain point-less with just two rounds remaining. They were a point in arrears when Andy Moran and Lee Keegan combined to set up O'Shea for the game's decisive score in first half stoppage-time. Diarmuid O'Connor immediately followed up with a point to give the Westerners' a somewhat flattering 1-8 to 1-4 half-time lead.

The signs were encouraging for Kildare when Daniel Flynn broke through for the opening goal which gave them a 1-4 to 0-5 lead after 21 minutes. Mayo had started strongly when points from Cillian O'Connor, Andy Moran and goalkeeper Rob Hennelly had propelled them into an early three-point lead before scores from Kevin Feely and Kevin Flynn brought the Lilywhites back into it after 12 minutes.

Hennelly denied Niall Kelly a certain goal a minute later before Cillian and Diarmuid O'Connor extended the visitors' advantage. Feely and Paddy Brophy replied to leave the minimum between the sides again before Flynn's goal brought the home crowd to their feet.

But Mayo finished the half strongly and they never looked in any danger of losing after that with Andy Moran and sub Conor Loftus among their second half scorers. Indeed, their winning margin would have been greater had they not passed up on a number of goal chances in the second period.