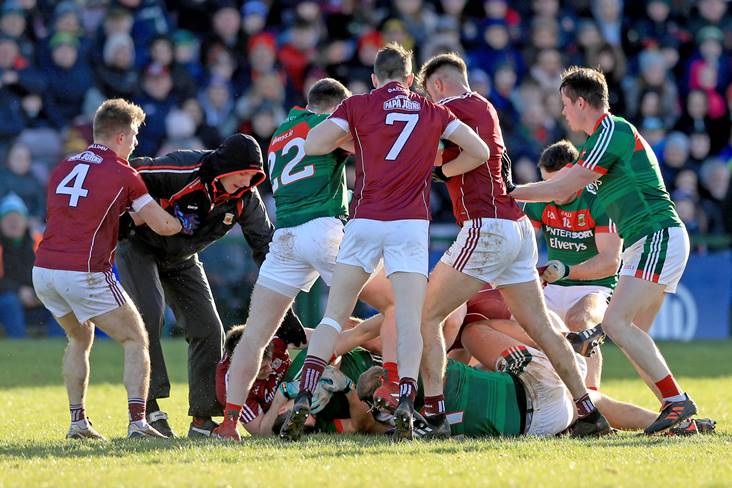 It was a bad-tempered match at Salthill, where Galway maintained their 100% record with a 1-13 to 0-11 victory over neighbours Mayo.

With 9,850 spectators looking on, perhaps wondering had they accidentally bought tickets for an MMA event, Barry McHugh blasted home a brilliant goal for Kevin Walsh's men, who have now won all three of their league outings to date this year.

There was no end of needle between the teams today, with numerous melees breaking out around the field in the fourth quarter as things boiled over time and time again and referee Anthony Nolan faced an impossible task due to the antics of the players. Galway finished the match with 14 men, with Paul Conroy dismissed, while the visitors had the O'Connor brothers Cillian and Diarmuid both sent off in stoppage time.

Having played with the bitter wind at their backs, the Tribesmen - still without their Corofin contingent - led by two points at the interval, 1-4 to 0-5, with McHugh netting at the midway stage of the opening period.

Damien Comer popped over the first two scores before captain Cillian O'Connor - a late addition to the visitors' starting XV - arrowed over a 13th-minute free. Following an exchange between Shane Walsh and Kevin McLoughlin (free), McHugh, who had replaced Adrian Varley in the Tribe's starting team - pounced for a precious three-pointer in the 18th minute.

Paddy Durcan replied to another pointed Walsh free and Diarmuid O'Connor had the visitors back within a goal of the winners as temperatures began to rise in Salthill… Cillian O'Connor's pointed free closed the first-half scoring and the sides swapped ends with all still very much to play for.

Conroy's second point of the second half nudged the home side four in front, 1-8 to 0-7, and the gap was still four at the three-quarters stage after McHugh and O'Connor traded frees - not for the first time. McHugh then posted one from play to leave five in it with 15 minutes left.

Eamon Brannigan and Cillian O'Connor (free) registered at either end and the former teased the gap out to six with only six minutes left to play. Conroy was dismissed for picking up a second yellow card but many others could have followed him as the teams decided it would be more appropriate to get stuck into one another rather than play football.

Eight minutes of injury time were added due to all the handbags being thrown around and Cillian O'Connor was shown a straight red card in the 74th minute for leading with a wild forearm off the ball; his brother, Diarmuid, soon followed him to the line after picking up a second yellow.

Brannigan swung over a late, late Galway point and O'Donoghue replied but nobody was paying much attention to the actual game at this stage due to the rather unsavoury scenes that had unfolded.

It's the brawls, the grappling and the all-round bad sportmanship that'll get most of the headlines and both County Boards are almost certain to be handed fines. There'll be fun when these two meet again at MacHale Park in May!