Allianz FL ups and downs: Farney men stave off the drop by relegating Galway in extra-time 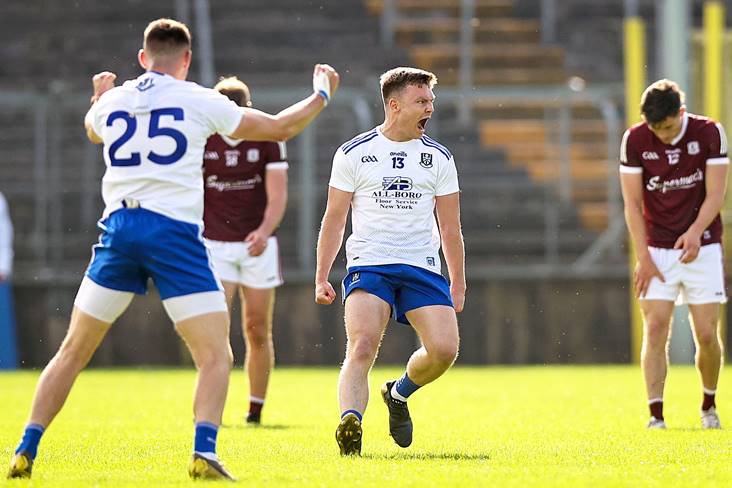 After a dramatic final day of action in the Allianz Football Leagues, promotion and relegation has been decided across all four divisions.

Mayo earned promotion back to Division 1 at the first attempt courtesy of a 2-22 to 2-18 victory against Clare in Ennis.

The Banner County trailed 2-13 to 0-8 at the break, but Colm Collins' men fought back superbly in the second half to cut the gap to a goal. However, the Connacht champions held on in the end.

Kildare will be dining at the top table of the league for 2022 after seeing off Meath 1-14 to 0-14 in a fiery encounter at Newbridge.

The Lilywhites were never headed throughout after getting off to the perfect start when Jimmy Hyland netted a goal and things got a bit heated towards the end with straight red cards for Meath's Brian Conlon and Conor McGill.

Armagh were hoping to secure their place in the top tier with a win against Roscommon and looked on course at half-time after Oisin O'Neill's goal put the Orchard County 1-7 to 0-7 ahead.

Kieran McGeeney's men remained in control on the resumption to ensure they will be playing Division 1 football next season and consign the Rossies to a third relegation from the top in five years, it finished 1-17 to 0-11.

The relegation battle went right to the wire at Clones as Monaghan managed to stave off the drop for another season after Jack McCarron relegated Galway with the last kick of the game in extra-time, 1-21 to 2-17.

Down 0-13 to 2-12 with five minutes of normal-time left on the clock, Darren Hughes pulled a goal back for the Farney men, which set up Conor McManus to force extra-time with his late point denying the Tribesmen.

A 1-13 to 0-9 loss to the midlanders represents a dramatic change in fortunes for Tipp, who were celebrating a first provincial senior football title in 85 years seven months ago.

At Fraher Field, Antrim secured their ticket to Division 3 following a 1-15 to 0-11 win over Waterford.

Finally, Wexford ousted Sligo 2-15 to 0-9 in the shield final at Portlaoise.

Relive all the action from today as it unfolded here.