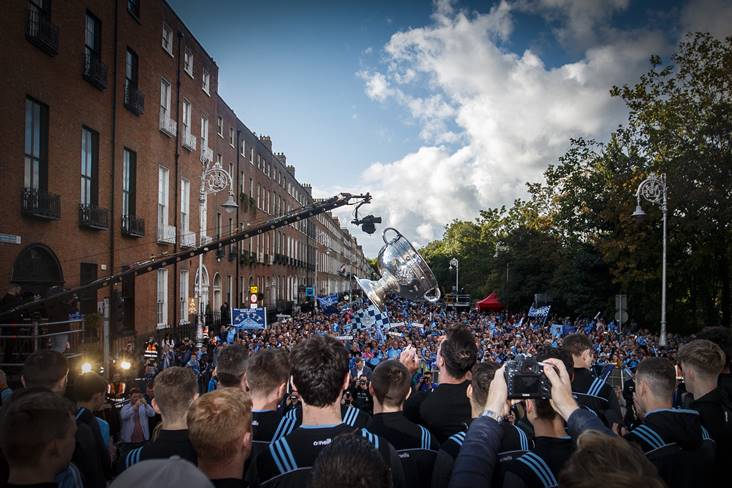 A view of the All-Ireland homecoming for Dublin's mens and ladies at Merrion Square. ©INPHO/Tommy Dickson.

Merrion Square was a sea of blue yesterday as more than 15,000 Dublin fans gathered to celebrate their history-making men and ladies football teams....

2 men that deserve special mention are Ollie Canning of Portumna and Niall Gilligan of Sixmilebridge, playing in their 26th & 24th championships respectively. Lot of their teammates today were just impure thoughts in their fathers’ heads when they made their debuts! #GAA

Anyone that heard Chrissy McKaigue’s speech or saw the Slaughtneil people afterwards could see how much it means still, after seven years. History is eternal. Some team, some club, some character

Good article with Brian Fenton in the Irish Independent today and a great insight into his mentality.
Of the many standout points the two best for me:
- The Dubs have already had a meeting about the AI Final
- Fento managed to mention cows. A real people pleaser that guy

News from Cork GAA tonight is very interesting ! Cork Senior Hurlers will have Kieran Kingston back in charge for the next 3 years while Pat Ryan will Manage the Cork Under 20’s. Donal Og Cusack will take charge of the Cork Minor Hurlers for a one year period. @rtenews @RTEgaa

If Japan can beat Ireland, Killybegs can beat Kilcar @zeeezuuuu

We are very proud of our past pupil Niall Daly of @propearses & @RoscommonGAA for receiving his first All Star nomination on the back of some outstanding displays this year.He shone in both the lge & Champ for Ros this year.Congrats Niall,your family& your club #gaa @officialgaa pic.twitter.com/gn9cOY1G2P

Well done to our senior hurlers but is this not what the #gaa is all about? Well said Joe! #utc #downchampions2019 #blackandamber #socialmediasensation pic.twitter.com/gjGZcxEKtd

Rathmore, Austin Stacks, Kenmare District and Mid Kerry have been eliminated from the 2019 Kerry SFC #GAA