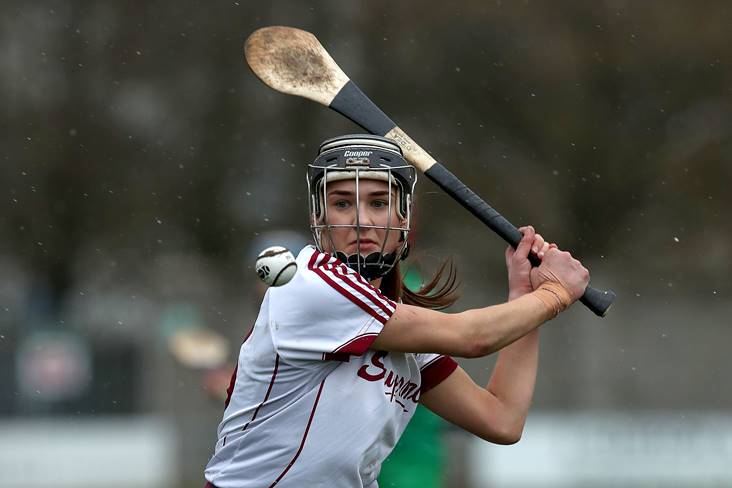 Galway got the defence of their Glen Dimplex All-Ireland senior camogie title off to a relatively stress-free start as they cantered to a 4-11 to 1-6 victory over Limerick at Pearse Stadium.

John Lillis selected four debutants for the visitors and the Limerick boss must have been pleased with the way the Shannonsiders competed in the first half in particular. His counterpart, Cathal Murray will be glad to get the campaign under way as his side look to complete a two-in-a-row for the first time in Galway’s history.

Niamh Hanniffy sprinted clear of the cover to register Galway’s first goal in the 11th minute and Carrie Dolan finished brilliantly with a one-handed strike just before the interval to give the champions a 2-1 to 0-4 lead into the wind, Caoimhe Costelloe’s free-taking keeping Limerick in touch.

Orlaith Kelleher gave Lillis’s crew an early advantage but they had no answer as Hanniffy went through the gears to complete a hat-trick of goals, while Ailish O’Reilly finished with four points. Costelloe’s goal from a free brought her tally to 1-5 for Limerick.

Injury-time points from Susan Daly and a Chloe Morey free secured a share of the spoils for Clare with Tipperary at the end of a competitive but tight affair at The Ragg. Clare had defeated Tipp after a replay in the Munster Championship and so it was no surprise that the teams knew each other so well, more or less cancelling each other out.

Cáit Devane scored three of her five points as Tipp led by 0-5 to 0-3 at half-time, Zi Yan Spillane and Lorna McNamara getting on the mark for the visitors.

Clare drew level at the three-quarter mark but two converted frees by Devane edged Tipp two ahead. Eimear Kelly and Ereena Fryday swapped point and it looked like Bill Mullaney’s squad would edge a vital win over Conor Dolan and John Carmody’s unit but Daly and then the nerveless Morey snatched a draw.

Antrim marked their return to senior fare with a famous  4-18 to 1-10 victory over Offaly in St Brendan’s Park, Birr. Róisín McCormick clocked up a goal and eight points but she had plenty of support, with Áine Magill grabbing 2-2 and Caitrin Dobbin helping herself to 1-3.

There was no hint of what was the come in the first half, with Offaly leading until Magill’s first green flag just before the interval. A seventh minute goal by Mairéad Teehan gave the Faithful the advantage and points from Sarah Harding, Aisling Brennan and Teehan kept them ahead but Antrim had drawn level when Magill struck on the stroke of half-time.

A couple of points from Teehan maintained the hosts’ interest but when McCormick billowed the net in the 40th minute, the Saffrons opened up and Offaly had no answer, Dobbin and Magill helping themselves to further goals on a memorable day for Antrim camogie.

The competition’s other Ulster representatives Down poked the bear when Anna Rogan’s goal straight after the resumption moved them within touching distance of Kilkenny at Liatroim. The Cats opened up thereafter and with Denise Gaule clocking up 13 points in a free-ridden affair, eased clear to a 1-23 to 1-10 triumph.

Mary O’Connell had a very good period at the beginning of the third quarter and her goal, allied to a brace of points ensured that Brian Dowling’s visitors led at half-time by 1-11 to 0-8.

Niamh Mallon was the primary scorer for Down and she would go on to score nine points, with five of those coming from play in another brilliant performance. Paul Donnelly’s team battled hard but with Gaule unerring from placed balls and Miriam Walsh among the others to find the target, Kilkenny outscored them by six points in the closing quarter.

Cork, who were defeated by Galway in both last year’s All-Ireland and this year’s National League finals, began their championship programme with a 2-14 to 1-6 success over Wexford at Bellefield.

Amy O’Connor’s pace and clinical finishing were decisive, the high-scoring St Vincent’s sharpshooter finishing up with 2-4, 2-3 of which came from play. Izzy O’Regan, Katrina Mackey and Emma Murphy hit a pair of points each and Chloe Sigerson clocked up four but Wexford showed more than enough to give Kevin Tattan hope that the Division 2 League champions can repeat their All-Ireland quarter-final qualification of last term.

A Joanne Dillon goal early in the second half brought Wexford within five points of Matthew Twomey’s outfit, Ciara O’Connor having shot four of her five points at that juncture. Cork had another gear though.

Dublin’s improvement under Adrian O’Sullivan continues as they defeated Waterford at Walsh Park by 1-11 to 0-12. They led by 1-8 to 0-8 at the change of ends, Aisling O’Neill, Jody Couch and Aisling Maher all multiple scorers, with Maher notching up the vital 25th-minute goal.

Beth Carton and Abby Flynn were Waterford’s primary scorers and Carton brought her tally to six when equalising five minutes from the end of normal time. Maher restored the Dubs’ advantage from a free and after Clodagh Carroll received her marching orders with a second yellow card three minutes from time, O’Neill split the posts once more.