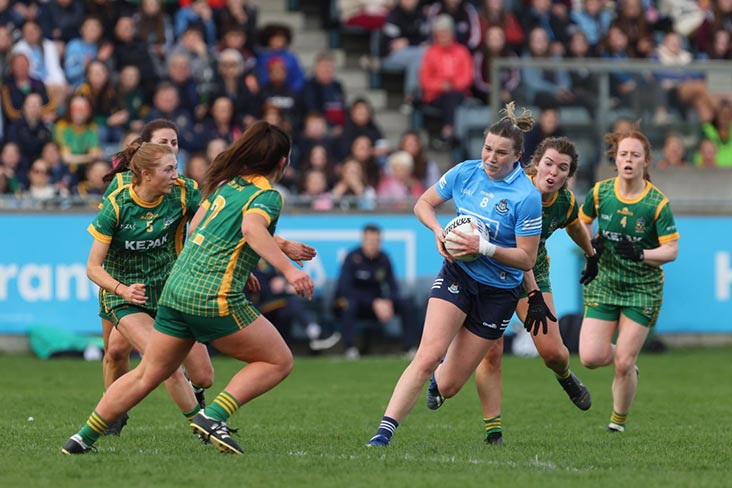 Jennifer Dunne on the attack for Dublin, well watched by the Meath defence. Credit: Damien Eagers.

Emma Duggan’s second half goal proved to be the difference as reigning All Ireland Champions, Meath, defeated rivals Dublin at Parnell Park. The sides were level at four points apiece at the break and a strong attack in the third quarter pushed Meath over the line to victory.

This was Meath’s first game in the Leinster Senior Championship since 2016, and they dominated the early exchanges. Stacey Grimes got Meath on the scoreboard first from a free on three minutes. Vikki Wall added the first from play and from some distance two minutes later after a well-timed pass from Niamh O’Sullivan.

While Dublin tried to get a foothold in the game, Meath pushed into a three point lead with Grimes hitting a second free on eleven minutes. On the resumption, Nicole Owens curled a terrific effort around the posts to get Dublin off the mark.

A game that was end to end, Sinéad Wylde reduced the gap to two points when Lyndsey Davey found her in space. However, this was cancelled out when Niamh O’Sullivan supplied Aoibhin Cleary and the TG4 All Star finished over the bar.

Kate Sullivan completed a terrific run when she split the posts to leave Dublin one adrift and the game was level on twenty-eight minutes when Jennifer Dunne found her range. At half time, there was nothing to separate the sides at four points each.

On the resumption, Grimes converted her third free before Niamh O’Sullivan pushed Meath into a two point lead a minute later.

Meath opened up a five point gap when Wall and Grimes exchanged and found Emma Duggan who rifled past Abby Shiels in the Dublin goal. Dublin were unlucky at the other end as Caoimhe O’Connor saw her effort rebound off the upright.

Vikki Wall grabbed her second point and pushed Meath into a six point lead when she ran from the centre of the field and converted while Grimes added her fourth free to make it a seven point game shortly after.

Two quick fire Kate Sullivan points reignited the Dublin attack and Hannah Tyrrell pointed to bring the gap back to four with around ten minutes left on the clock. Dublin almost found the goal they needed when Sinead Goldrick spotted Lyndsey Davey behind the Meath defence, but she couldn’t connect with the pass.

Martha Byrne and Goldrick both pointed to reduce the gap to two with time running out. Dublin lost Lauren Magee to the sin bin in the final moments and when Aoife Kane converted, Dublin were just a single score adrift. However, Meath kept a stranglehold on possession and did enough to hang on to a one point victory. Meath will face Westmeath in Páirc Tailteann next Saturday at 3pm in Round Three.