Dubs show no mercy as Wexford put to the sword 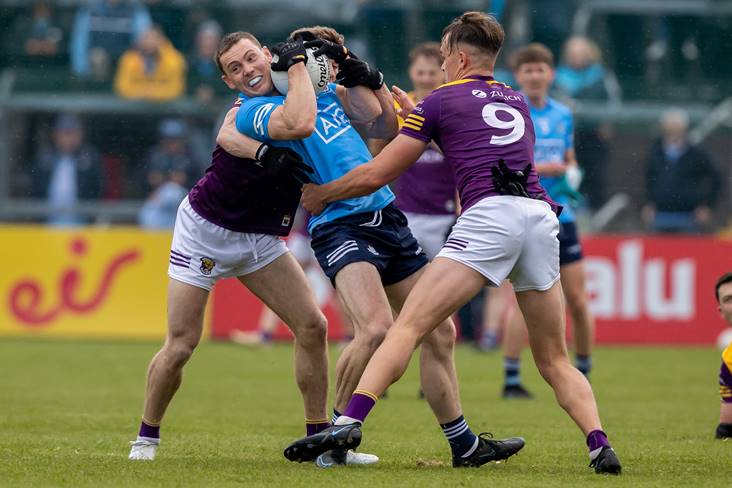 Dublin got their quest for a twelfth successive Leinster senior football championship title on track this evening with a comprehensive defeat of hosts Wexford.

Dessie Farrell's Dubs showed no mercy as 1-6 for the returning Con O'Callaghan and five points from play from man-of-the-match Brian Fenton powered the Delaney Cup holders to a 1-24 to 0-4 win over the Model men in this quarter-final tie at a wet and blustery Chadwicks Wexford Park.

With Wexford opting to play against the breeze in the opening half, the Dubs were held scoreless until the 9th minute when Dean Rock pointed first but Farrell's charges soon stepped into gear as they set about dismantling their Division 4 opponents by 23 points.

Eoghan Nolan got Shane Roche's side off the mark in the 11th minute with a brilliant effort on the run but a ruthless Dublin reeled off eight unanswered points to take a 0-10 to 0-1 advantage into the break.

Two-time All-Star Footballer of the Year Fenton picked off some highlight reel points in the first half, kicking off both feet.

The second period continued much in the same vein, while the only goal arrived five minutes after the restart when the crossbar denied the Dubs for the third time in the game but O'Callaghan - making his long-awaited return from an ankle injury - reacted quickest to palm the rebound to Darragh Brooks' net.

Further scores from O'Callaghan were added to by John Small, Tom Lahiff, debutant and substitute Lorcan O'Dell, Brian Howard and Rock and they could have easily had more than one goal but opted to take their points.