Ladies: Tyrrell and Rowe combine for 4-14 as Dublin demolish Westmeath 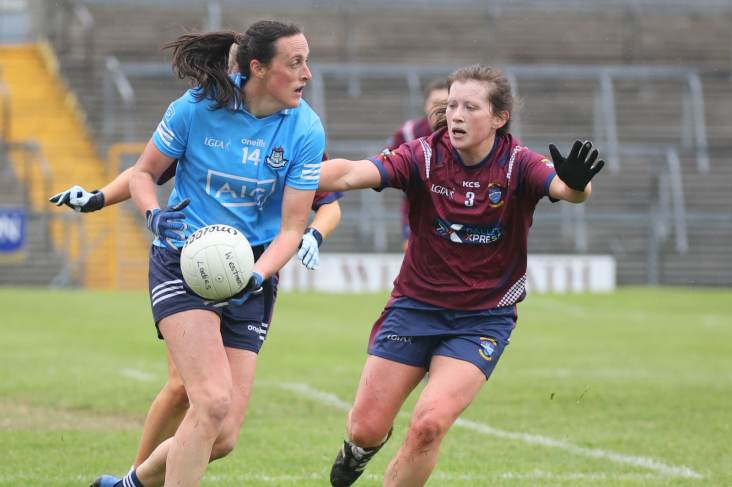 Hannah Tyrrell and Carla Rowe registered a combined haul of 4-14 as defending champions Dublin heralded the return of the TG4 Leinster Senior Football Championship with a convincing victory against Westmeath at TEG Cusack Park.

In the first game played in this competition since 2019, Tyrrell (2-9) and Rowe (2-5) shone throughout for the Jackies. Substitute Kate Sullivan also struck 1-2 off the bench and Mick Bohan’s charges can now move confidently into next Saturday’s meeting with All-Ireland champions Meath at Parnell Park.

Having missed out on a fifth successive Brendan Martin Cup title to the Royals last year, Dublin were intent on hitting the ground running in the 2022 championship. There were just 21 seconds gone on the clock when corner-forward Sinead Wylde rocketed a shot to the Westmeath net.

Her inside partner Tyrrell followed up with a point from play and while the Lake County eventually opened their account through a Sarah Dillon free, Dublin were in for a second goal on 12 minutes.

Named as joint-captain - along with Niamh Collins - for this year, Rowe raised another green flag to give her side a six-point stranglehold. Rowe proceeded to trade scores with Westmeath’s Ciara Blundell, in advance of Dublin midfielder Jennifer Dunne added her name to the scoresheet.

A place-ball effort from Tyrrell was cancelled out by Dillon at the opposite end, but the holders were the dominant side for the remainder of the opening period. Thanks to unanswered points from the boots of the excellent Tyrrell (three), Nicole Owens and Rowe, the Metropolitan outfit brought a convincing 2-9 cushion into the interval.

Tyrrell extended her tally to six points on the resumption and after Blundell had contributed her second, yet another Dublin goal arrived in the 34th-minute. Introduced at half-time, Sullivan’s long delivery deceived Westmeath netminder Aoife O’Donnell on its way to the net.

Tyrrell grabbed a three-pointer of her own moments later, before Rowe recorded a fifth major for a rampant Dublin on 42 minutes. Wylde, Sullivan, Niamh Hetherton and Martha Byrne were also on target either side of the third-quarter mark as the Sky Blues continued to set out their stall.

A Siobhan Killeen single complimented a brace for Rowe, before Tyrrell posted 1-2 without reply in the space of just two minutes. Sullivan (free) and Owens subsequently rounded off the scoring to complete an impressive display from Dublin in Mullingar.