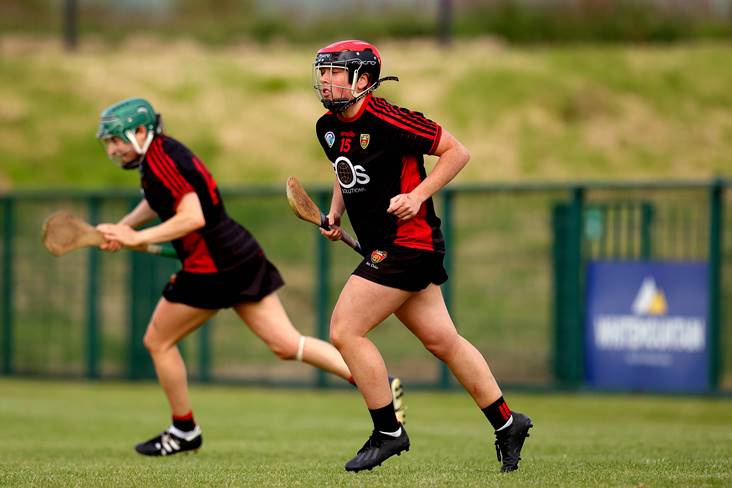 Two stunning goals in a five-minute spell just before half-time by Niamh Mallon and Sorcha McCartan, and another in the 57th minute by Anna Rogan after Antrim had clawed back a seven-point deficit to be level, earned Down victory in a pulsating Littlewoods Ireland Camogie League Division 2 final at Owenbeg.

This was a repeat of last year’s All-Ireland intermediate final, which Derek Dunne’s side won convincingly, but Antrim are a youthful squad that are going places, and they went close to posting a momentous triumph.

They will bemoan that period just before the interval particularly, but Down shot 11 wide in the opening half with the wind so the Mournewomen would have had cause for regret themselves had they not prevailed.

It was fitting that a game of such high quality went down to the wire. Some of the scores were of an ethereal nature, and a great portion of them just plain brilliant. The pace of proceedings was always high and the intensity of the battle in the same category.

Sorcha McCartan was the key component of the Down attack in the opening period, during which she scored a goal and four points.

Though Sara Louise Graffin hit a first-minute point, they took a little while to get going, despite playing with the wind and were trailing by the odd point in five early on before McCartan equalised with her second white flag, from a piledriver that was touched over the bar by Catrina Graham.

Nicole O’Neill, Róisín McCormick and Maeve Kelly had all shot outstanding scores for Antrim, and they led by two when Caitrin Dobbin’s point off the stick was augmented by O’Neill’s conversion of a free.

Down hit 2-3 without reply however and had gotten back level when Mallon provided a 27th minute goal with her first real contribution of the game.

It was a trademark documentation of the innate ability the Portaferry prodigy has been illustrating for a number of years now, as she picked up possession around 30m out and rounded the two Antrim defenders tracking her throughout. She then accelerated away as two more gave chase and then, as Graham advanced from the goal, batted the sliotar to the roof of the net without breaking stride.

McCartan added a point while off balance and then goaled with a ferocious strike from just inside the 20m line and a little to the right of the posts, after selling an outrageous dummy, having run onto Graffin’s diagonal delivery.

O’Neill did have time to register a lovely point and it was 2-6 to 0-6 at the change of ends.

Paul McKillen, Jim McKernan and company managed to organise Antrim sufficiently to shore up their defence in the second half and they set about reducing the deficit, helped by conceding only one point in 26 minutes before Down’s late rapier thrust.

O’Neill and Mallon exchanged points but then it was all about Antrim from there, points from the 20-year-old McCormick, Anna Connolly and an O’Neill free making it a one-goal game.

Then McCormick showed a national audience what Ulster supporters have been seeing regularly, with a mind-boggling goal in the 54th minute. It was well worked, the move started by Shauna Devlin. Dobbin sent a crossfield ball that landed about 25m out.

McCormick stuck up her hurley among a phalanx of other sticks, killed the sliotar and dropped it into her hand. From there, she ran in an arc around the cover before providing the finish the build-up demanded with a low drive.

Suddenly the teams were level and Antrim had all the momentum. But Down have more experience of these types of situations and it was they found the killer touch, Graffin grabbing another ball out of the sky, sending Mallon on her way and she in turn, drew the cover before giving Rogan the simplest of tasks from close range.

It was the decisive score of a game that will live long in the memory.