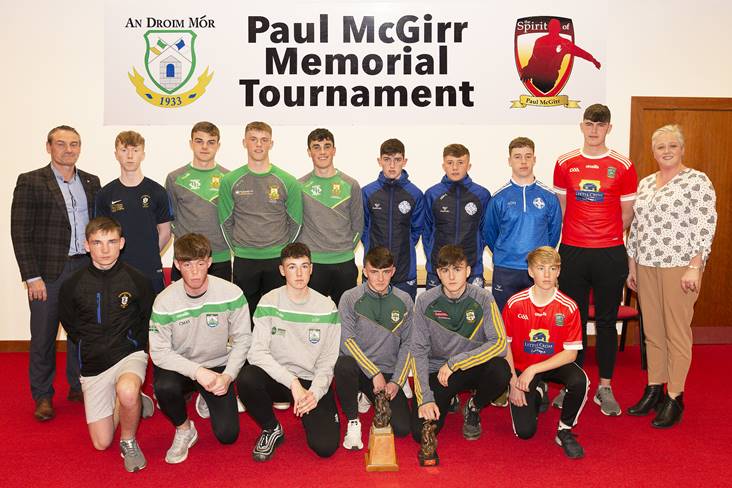 The launch of the Paul McGirr Ulster U16 Club Champions Tournament took place in Garvaghy on Friday evening.

The launch of the Paul McGirr Ulster U16 Club Champions Tournament took place in Garvaghy on Friday evening and has thrown up some mouth watering ties in what is one of the most popular underage football tournaments in the GAA calendar.

Now in it’s 20 th year the tournament is well established in the annual fixture list and always provides a high standard of attacking football featuring some of the top underage talent in the province.

Despite the Derry and Tyrone U16 championships only finishing this weekend there are already some outstanding teams lined up, no more so than the all conquering Burren team who two years ago won the All Ireland Feile at U14 level.

They won’t have it all their own way though with Donegal champions Ghaoth Dobhair who are looking to emulate their recent Ulster senior and U21 club success expected to compete strongly.

Clan Na Gael emerged from a very competitive Armagh championship and would fancy themselves to progress against Fermanagh champions Newtownbutler who are returning after an impressive showing last year.

Monaghan champions Carrickmacross are newcomers to the tournament and will provide stern opposition to Antrim champions O’Donovan Rossa who have a great record in the competition having won it in 2011 and reached the final in 2015.

As usual all funds raised in the tournament go the The Spirit Of Paul McGirr Trust who are completing some incredible work for poor and disabled children in Lusaka, Zambia, all in the name of Paul who tragically lost his life following a collision while playing for Tyrone minors against Armagh in the Ulster championship in 1997.

The games will take place over the next four weeks in Gardrum Park Dromore, the full draw is as follows: