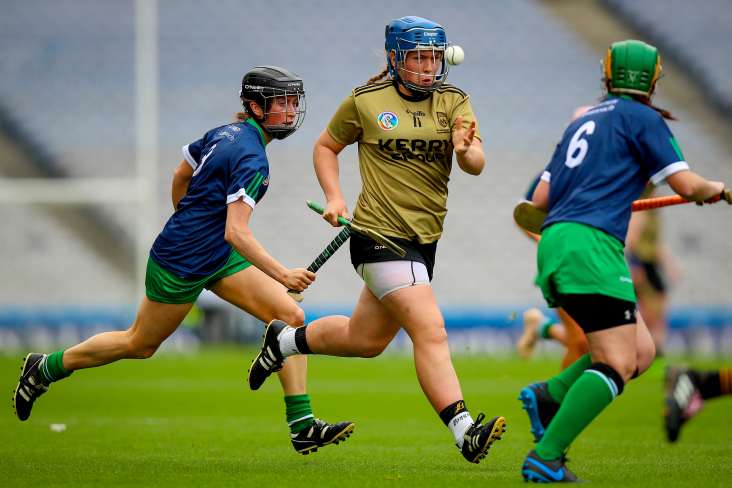 The sextet set to take part in the knockout stages of the All-Ireland Intermediate Camogie Championship has been decided, with Kilkenny and Derry coming out of Groups 2 and 3 as table-toppers, with Antrim and Kerry certain of quarter-final spots as runners-up.

Tomorrow’s Group 1 clash between Galway and Meath will determine the rankings in that section and two of the three group winners will play in the semi-finals on August 28, with the quarter-finals on August 21.

Carlow, Kildare and Tipperary must do battle to retain their intermediate ranking and the pairings will be announced on Monday morning.

Antrim’s second-half salvo sent Kildare into the relegation play-offs but more significantly from their perspective, ensured that they were through to the knockout stages by virtue of their positive score difference, boosted by the 3-16 to 1-7 scoreline.

Kildare actually led in the first half at the Roger Casements facility in Portglenone but Katie Carey’s goal after two Róisín McCormick frees turned it around to give the home team a 1-7 to 1-2 interval advantage.

It was one-way traffic after the resumption, as a brace of goals from Caitrin Dobbin allied to a flurry of points from McCormick, Róisín Kelly, Lucia McNaughton and Áine Magill propelled them to the last six.

Cork had begun the day as table-toppers in Group 2 but ended out of the qualifying positions as a result of Antrim’s huge win and their own 2-7 to 0-9 loss to Kilkenny at John Lockes GAA in Callan. The three teams ended level on six points but score difference squeezed the Rebels out of the top two.

Their encounter with Kilkenny was a real arm wrestle, with the result in doubt right up until Hannah Scott’s 58th minute goal opened a five-point gap. Kilkenny had begun quickly with an early goal but a brace of points by Rachel O’Shea settled the Leesiders and they were just two in arrears at the change of ends, 1-3 to 0-4.

Lauren Callanan and Rachel Harty were among the scorers as they drew level but Kilkenny responded with three points on the trot and were two ahead when Scott provided the definitive thrust.

Like Antrim, Kerry had begun the day in third in Group 3 on score difference and their 2-11 to 0-5 defeat of Laois at The Harps grounds in Durrow saw them vault over the midlanders.

It was sweet revenge for the visitors, who had been stunned by a comeback victory by Laois in last year’s quarter-final but they made no mistake on this occasion. Jackie Horgan’s goal after eight minutes sent the Kingdom on their way, though they needed Aoife Fitzgerald to save an Aimee Collier penalty to keep them 1-6 to 0-3 in front at half-time.

The margin had increased to nine by the time Patrice Diggin’s free went all the way to the Laois net in the third quarter, the gifted Clanmaurice scoring machine finishing with 1-3 to her name, as did Horgan.

With Derry comfortably accounting for Tipperary by 1-17 to 0-9, that ensured the Oak Leafers would progress with a 100 per cent record, Kerry going through to the quarter-final as runners-up.

Dublin’s second team secured their intermediate status and left Carlow’s under threat by virtue of a 4-11 to 2-9 triumph at Trinity Sports Grounds.

It was the Blues’ first victory of their Group 1 campaign but a deserved, as well as critical one, though it wasn’t until Ciara Holland’s 51st minute goal that they finally shook off the doughty visitors, who had been reduced to 14 players by the dismissal of star forward Ciara Quirke for a second yellow-card offence 15 minutes earlier.

Only two points had separated the sides at that juncture, Dublin having led by 1-6 to 1-3 at the change of ends, Holland giving the hosts a dream start with her clinically-taken first major in the fifth minute to open the scoring. Kate Garry Murphy goaled at the other end to keep Carlow in contention.

Former senior star Siobhán Kehoe raised a green flag directly from the restart but David O’Mahony’s outfit responded brilliantly once more, Garry Murphy grabbing her second goal and Eleanor Treacy pointing either side of that score to reduce the deficit to the minimum.

Quirke got her marching orders soon after however and the numerical advantage proved critical for Dave Dunning’s charges, Kehoe registering her own second goal before Holland’s ground strike sealed the deal.

In the Premier Junior Championship, Cavan defeated Down by 1-11 to 1-3 at Kingspan Breffni to cement their berth from Group 3, Limerick having already assured themselves of top spot.

Armagh and Clare are the other group winners in contention for direct spot to the semi-finals, with Wexford and Roscommon looking forward to quarter-final jousts.

Cavan were coasting along leading by 0-7 to 0-1 thanks to three points from Clodagh Keenaghan and two from Áine Corcoran but were rocked by the concession of a calamitous goal in the 27th minute.

They composed themselves at the break however and Elaine Brady’s early goal certainly helped. She added a point after similar scores by Katie McGilligan and Keenaghan, and Corcoran also added to her tally to confirm the verdict.