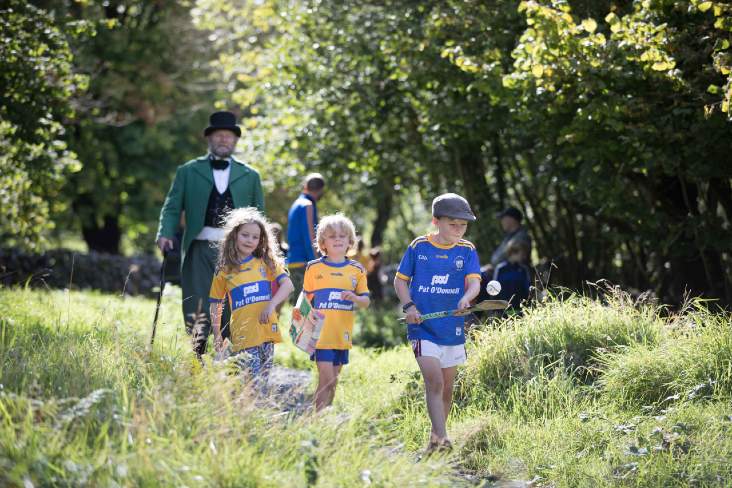 Tadhg and Aodhan ÓGairbhith and their Sister Liadan with "Michael Cusack" (Martin Vernon) at the announcement of details of the inaugural Michael Cusack Day in Carron, located in the heart of the Burren in County Clare, at midday on Sunday, 20 September. Photograph by Eamon Ward

The significant contribution to Irish culture by the founder of the GAA will be celebrated with the inaugural Michael Cusack Day in Carron, located in the heart of the Burren in County Clare, at midday on Sunday (20 September).

A Shane Gilmore sculpture representing the central role played by Gaelic Games in communities across the island of Ireland will be unveiled exactly 173 years on from Cusack’s birth in Carron, while 32 trees representing each county will be unveiled as part of the TOMAR Trust-funded GAA and Burren fairy trails near the Michael Cusack Cottage.

The event also will feature the launch of “Going WeLL”, a national wellness experience programme being developed nationally by the GAA to encourage people to take better care of their mental and physical health, and by so doing, to reconnect with their communities.

Going WeLL is being rolled out on a pilot outreach basis to a range of communities, schools and FET (Further Education & Training) Centres from the Michael Cusack Centre this winter, and is targeted at supporting 30 to 33 hours of additional ‘Wellbeing’ Education  per annum in the Junior Cycle programme of pilot schools.  The programme is a strategic partnership between the GAA, Limerick & Clare Education and Training Board, Clare County Council, POBAL, the Department of Rural & Community Development and Michael Cusack Centre Ltd - a non-profit company which operates a tourism visitor experience and centre beside Cusack’s restored homestead cottage in Carron.

“Michael Cusack Day seeks to draw on the vision of ‘Citizen Cusack’, as he was known, and to offer it as an opportunity to reflect on the contribution of a true icon of Irish culture as well as all that is good in community and society,” said Flan Garvey, Chairperson of Michael Cusack Centre Ltd.

“In his own time, Michael Cusack was born during the Great Famine and reared in poverty. Yet, he excelled in his education career and founded the GAA to reflect all that was good in the community and society of his time: hurling, football and handball and the Irish language. The context was a post-famine time of poverty and colonisation,” explained Mr. Garvey.  “He drew on the inspiration of the Burren landscape for his vision of life.  The GAA that he helped to establish in 1884 has since grown into the national GAA organisation that is present in every parish and community in all of Ireland and worldwide.

“Michael Cusack Day seeks to reconnect with that vision and heritage and in the context of the challenges of COVID-19 to offer positivity in terms of physical wellbeing through GAA games, but also mental health wellbeing. This is the reason that the Going WeLL programme is being introduced to sustain the next generation in schools and communities,” he added.

The Michael Cusack Centre, the GAA trail and the Fairy Trail will be open to the public each Saturday and Sunday from 10.00am to 4.00pm throughout September and October. Pre-booking is advised. Contact 065-7089944 / [email protected]