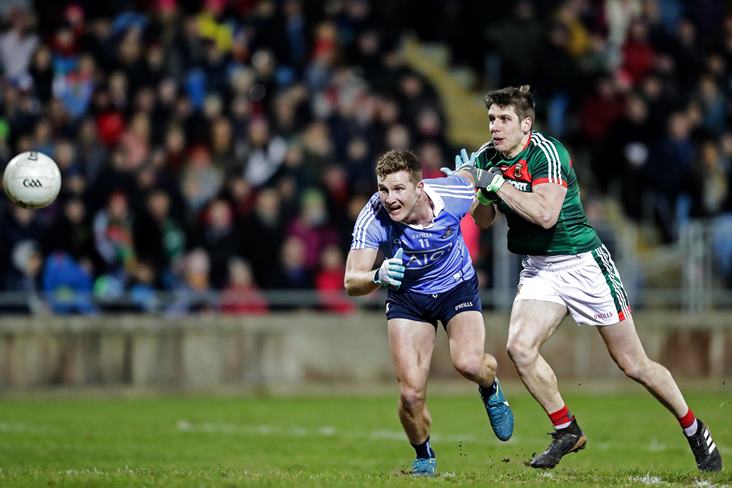 Goals from Paul Mannion and Niall Scully in either half helped Dublin to a comfortable 2-10 to 0-12 victory over Mayo at chilly Castlebar.

With 15,313 in attendance on a cold night in the west, the All-Ireland champions managed just two second-half scores but were by far the better team in this repeat of September's Sam Maguire decider. Mannion's second-minute cracker to the roof of the net off his left foot gave the Dubs a dream start and they led by 1-9 to 0-7 at the break.

When Scully fisted to the net in the 46th minute, set up by the excellent Dean Rock (0-6) at the end of another penetrating move, it was a seven-point game, 2-9 to 0-8. Rock and Jason Doherty traded frees and there were no scores at either end in the final 20 minutes of normal time.

The winners had Michael Fitzsimons dismissed in injury time for a foul on Aidan O'Shea as the hosts slotted three consolation points, all from (substitute) Conor Loftus frees, but Stephen Cluxton's goal was never threatened as the peerless Dubs goalkeeper marked his 100th league appearance with yet another clean sheet.

Rock, Fitzsimons, Kevin McManamon and Darren Daly were all late additions to Dublin's starting team, while Diarmuid Connolly and Cian O'Sullivan both came off the bench in the second half. Lee Keegan was on for Mayo from the start and he pointed after Doherty (free) and Ciaran Kilkenny had shared points in the wake of Mannion's opening bullet.

Three Rock points had the visitors ahead by 1-4 to 0-3 halfway through the first half and the elegant Brian Fenton traded delightful points with Andy Moran. There were exchanges between Rock (free) and Kevin McLoughlin and also Kilkenny and Stephen Coen before Mannion and Rock (free) registered the All-Ireland champions' last two points of the first half either side of a McLoughlin reply.

Goalkeeper Robert Hennelly opened the losers' second-half account but he was beaten for the second time five minutes later, after the Dubs had lost Mannion to what looked like a hamstring injury. Four wins from four for Dublin; three defeats in a row for Mayo.