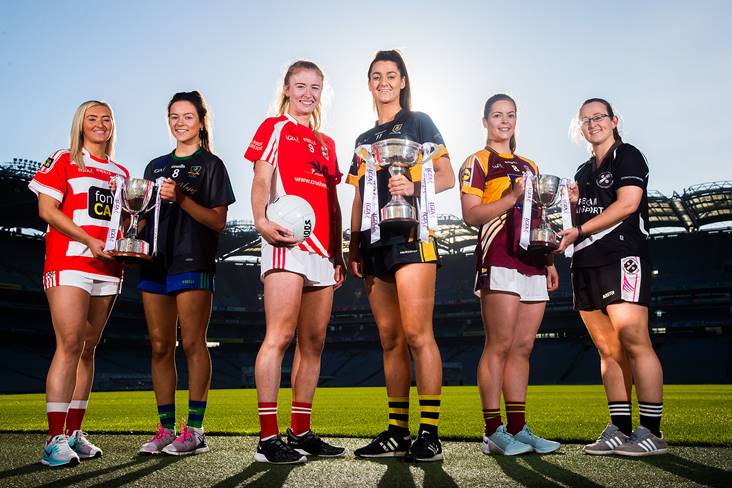 PLAYERS and mentors from the six participating teams in next weekend’s All-Ireland Ladies Club Football Finals gathered at Croke Park for Captains Day on Monday, November 18.

Clubs from Antrim, Cork, Galway, Mayo and Offaly are on the quest for silverware as they gear up for next weekend’s eagerly-anticipated deciders, with the Senior, Intermediate and Junior Finals down for decision.

On Saturday, November 23, at the Gaelic Grounds in Limerick, Kilkerrin-Clonberne (Galway) and holders Mourneabbey (Cork) go head-to-head for the Senior title at 5pm, a game that will be shown LIVE on TG4.

Earlier in the day, at Breffni Kingspan in Cavan, Naomh Pól (Antrim) and Naomh Ciarán (Offaly) will battle it out for the All-Ireland Intermediate Club crown, and that game, which has a 2.30pm throw-in time, will be streamed LIVE on the LGFA Facebook Page.

On Sunday, November 24, it’s the turn of the Junior Finalists, namely CL MacHale Rovers (Mayo) and Donoughmore (Cork), who will meet at Duggan Park in Ballinasloe at 2pm.

That fixture will also be streamed LIVE on the Ladies Gaelic Football Association Facebook Page: https://www.facebook.com/LadiesGaelicFootball/

For the third season in a row, reigning All-Ireland champions Mourneabbey will contest the Senior Club Final.

Mourneabbey, currently managed by Tipperary’s 2019 TG4 All-Ireland winning boss, Shane Ronayne, had lost Finals in 2014, 2015 and 2017 but they finally got over the line last year when seeing off Dublin outfit Foxrock-Cabinteely in the showpiece decider.

Their opponents this time are first-time Finalists Kilkerrin-Clonberne, who have newly-crowned TG4 All Stars Nicola and Louise Ward, who are twin sisters, in their ranks.

Kilkerrin-Clonberne can also call upon the talents of the Divilly sisters, Siobhán and Olivia, while they’ll also have the three Noone sisters, Hannah, Eva and Lynsey, who have been winning regularly at underage level with Galway, spearheading the Western charge.

Mourneabbey are a battle-hardened outfit, however, with established Cork stars Eimear Meaney, Maire O’Callaghan, and the O’Sullivan sisters, Ciara and Doireann, in their ranks.

Mourneabbey can also call upon the services of 2017 TG4 Senior Players’ Player of the Year Noelle Healy, a key member of the Dublin teams that have won the last three TG4 All-Ireland Senior titles.

Both teams came through tough semi-finals to make it to the Gaelic Grounds, with Mourneabbey accounting for old foes Donaghmoyne, while Kilkerrin-Clonberne defeated Foxrock-Cabinteely.

In 2015 and 2018, Mourneabbey and Kilkerrin-Clonberne met at the All-Ireland semi-final stage, with Mourneabbey winning on both occasions.

Both Intermediate Finalists, meanwhile, are gracing this stage for the first time, and it’s also the very first time that clubs from each county have reached this stage of the competition.

Naomh Ciarán will hope to keep the cup in Leinster for the third year in a row, following wins for Clontarf (Dublin) in 2018, and Dunboyne (Meath) a year previously.

The last team from Ulster to lift the All-Ireland Junior crown was Lisnaskea from Fermanagh back in 2011, and a win for St Paul’s would bridge an eight-year gap for the province.

In the Junior Final, two-time All-Ireland Senior Champions Donoughmore are looking to follow in the footsteps of Aghada in 2017 and Glanmire last year by bringing the Junior silverware back to Cork.

This is the fifth successive year that a Cork club has contested the All-Ireland Junior Club Final, as Glanmire (2018), Aghada (2017), Kinsale (2016) and Bantry Blues (2015) all appeared on the big day in previous seasons.

For Mayo Ladies Football, this is also a big day as it marks the first time since 2017, when Carnacon claimed Senior honours, that a team from the county has contested an All-Ireland Club decider.

The CL MacHale Rovers team is graced by Rachel Kearns, who claimed a TG4 All Star award at the Citywest Hotel last Saturday night.

No Mayo team has ever won the All-Ireland Junior Club Championship, although Knockmore did contest the 2008 Final.

At Captains Day, Mourneabbey were represented by Eimear Meaney, while Louise Ward was present from Kilkerrin-Clonberne.

Club captain Áine Tubridy made the trip from Antrim on behalf of Naomh Pól, while Naomh Ciarán were represented at the event by Amy Gavin Mangan.