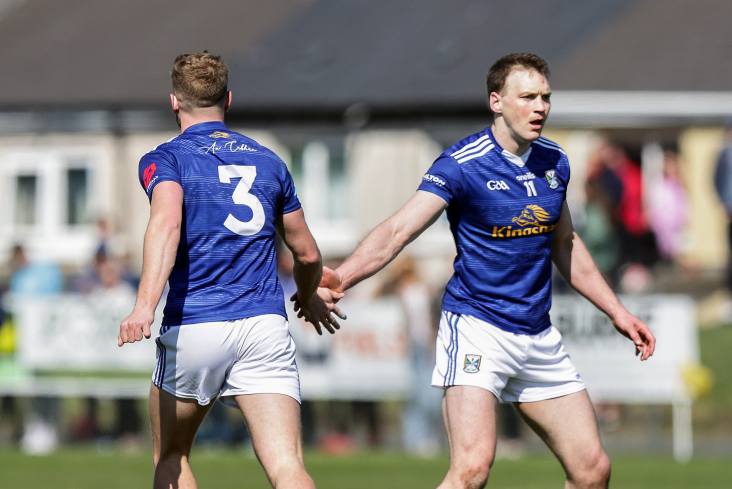 Cavan and Leitrim will be in Monday morning’s draw for the quarter-finals of the inaugural Tailteann Cup after coming through their respective first round ties with relative ease this afternoon.

Cavan scored a 0-24 to 1-12 win over Down at Kingspan Breffni, where captain Raymond Galligan denied Barry O’Hagan from the penalty spot twice on the eve of half-time to help the hosts carry in a 0-13 to 1-3 lead at the break.

The Mourne men had enjoyed the perfect start to this first round clash after Ruairi O’Hare hit the net for them six minutes in, but the Blues got motoring with points from Gerry Smith, long range free specialist Galligan, who finished with 0-7, and Paddy Lynch before Oisin Kiernan and James Smith sailed over to put them two in front.

Galligan would expertly sail over two more frees and a ‘45’ while Gearoid McKiernan weighed in with a hat-trick of points that had Cavan cruising, and when O’Hagan’s retaken penalty was kept out once more by the Breffni skipper it drew a mighty roar from home crowd as David Gough sounded the half-time whistle.

Liam Kerr and Pierce Rafferty kept the visitors in the battle with early points in the second-half, but Down were up against superior opposition on this occasion as substitutes Thomas Edward Donohoe and Niall Carolan (the latter making his senior debut) were able to have an immediate impact for Mickey Graham with points off the bench.

Paddy Lynch rounded off Cavan’s tally with seven minutes left in normal time, as they were already safely through at their fellow Ulster men’s expense.

In Carrick-on-Shannon, goals in each half helped Leitrim to a 2-14 to 1-12 victory against Enda McGinley's Antrim side.

Shane Moran’s strike on 19 minutes saw the hosts leading by 1-5 to 0-3 and the points of Keith Beirne (2), Cillian McGloin and Donal Wrynn would send them in at half-time eight to the good.

The wheels looked like coming completely off for Antrim when Moran hit their net again four minutes into the restart.

However, Peter Healy’s major with a quarter of an hour remaining took some tarnish off the scoreboard for the Glensmen and they pushed to the end with points from Pat Shivers (2), Dermot McAleese and Ruairi McCann (free), but it left them five short when the final whistle sounded.