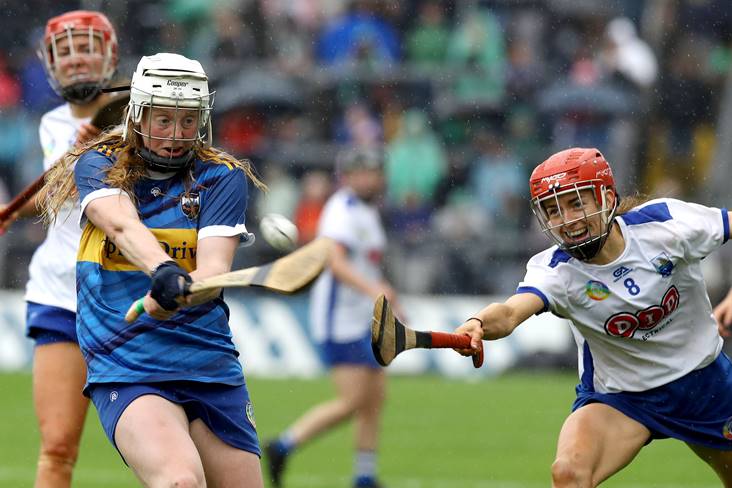 Tipperary’s sustained consistency of appearances in the knockout stages of the Glen Dimplex All-Ireland senior camogie championship, and in particular, their record of appearing in the last four semi-finals, is under considerable threat as a result of the a 1-16 to 0-13 defeat by resurgent Waterford at Semple Stadium.

The visitors followed up a resounding victory over Wexford last week with another tremendous effort in wet conditions, finally getting the better over opponents who had ended their aspirations at quarter-final level in recent years.

Although unbeaten to this juncture courtesy of draws against Clare and Dublin, Tipp have stuttered in the campaign to date without All-Star Karen Kennedy due to injury and former captain Orla O’Dwyer, due to her AFL commitments. Róisín Howard’s suspension was a further blow and they never really got going at the county’s GAA headquarters against a Waterford team that has been rebuilding this year but had standout performers in Clara Griffin, Lorraine Bray and Beth Carton.

Waterford move into second place in Group 1, just ahead of Dublin and behind Cork, after the Rebels came from behind to account for the Metropolitans by 2-10 to 0-9 courtesy of two Katrina Mackey goals yesterday. Meanwhile, Tipp face a tall order to progress now, though it remains in their hands.

The Premiers did well to go in at the break trailing by just 1-7 to 0-7. Bill Mullaney’s charges had were second best for most of proceedings and trailed by five points at the end of the opening quarter after Carton, Róisín Kirwan, Niamh Rockett and Bray moved the visitors 0-6 to 0-1 ahead.

Ereena Fryday, Grace O’Brien and Niamh Treacy illustrated the Tipp character but Abby Flynn dispatched a rocket to the roof of the Tipp net after carrying strongly, having been found with an excellent diagonal by Carton. Carton added two points and it was a six-point game.

Three points from Caoimhe Maher and Eimear McGrath (two) left it nicely poised at the change of ends.

Waterford settled at the break and resumed with three points in six minutes, including two from Carton. Treacy and McGrath replied for Tipp but the Blue and Golds were dealt a major blow when Mary Ryan, who had denied Carton a goal with a fantastic hook in the first half, was dismissed after receiving a second yellow card.

The group’s other two games were played yesterday, and apart from Cork overcoming Dublin, a first-half goal from Joanne Dillon sent Wexford on their way to 1-9 to 0-11 triumph over Clare, Claire O’Connor hitting the injury-time winning point.