Camogie: Mackey on the double as Cork see off Dublin, while Wexford edge past Clare 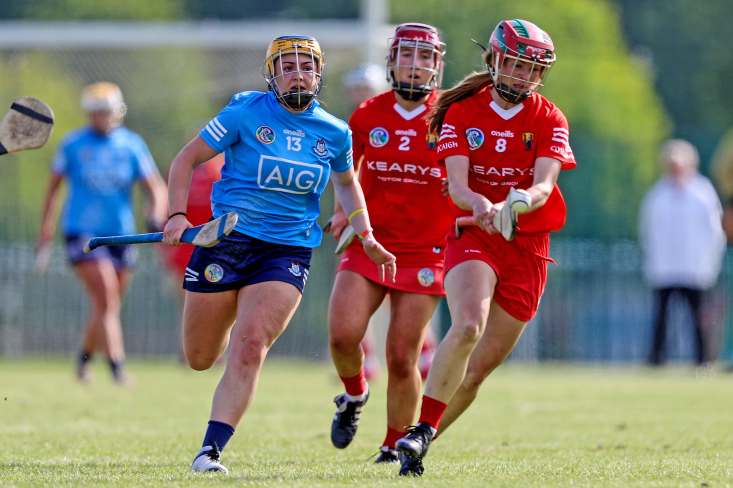 Cork survived a fervent Dublin challenge to retain their perfect record, scoring the last goal and eight points to record a 2-10 to 0-9 win over Dublin in the Glen Dimplex All-Ireland senior camogie championship Group 1 tie at the St Peregrine’s club grounds.

Katrina Mackey struck for both Cork goals and they were needed, as a run of nine points in a row from Dublin had left them chasing shadows in the first ever Pride Round in camogie history.

Cork threatened to run away with it in the first quarter, opening up a five-point advantage when Mackey dispatched to the Dublin net in the 15th minute, following up from Amy O’Connor and Saoirse McCarthy points.

That was the start of an astonishing scoring run as the Blues’ belief became bolstered. Aisling O’Neill followed up Finnegan’s score and the exciting attacker added her second after Aisling Maher split the uprights with a brace including one from a free, to move the home team ahead.

Maher made no mistake from a second placed ball for her third and it was 0-7 to 1-2 at half-time, Cork not having scored in 23 minutes, including eight minutes of injury time.

Matters didn’t improve immediately for Matthew Twomey’s unit after the resumption, as Finnegan and Twomey pointed in the opening two minutes. O’Connor ended a lengthy scoring famine from a free that seemed to unscramble the collective Cork mindset. They were quickly back on terms thanks to Kate Wall, Chloe Sigerson and Mackey and a feisty affair became dotted with yellow cards.

Cork edged ahead through O’Connor before Mackey plundered her second major in the 49th minute. Dublin continued to fight mightily but Muireann Kelleher received her marching orders three minutes from the end of normal time, having been issued with her first yellow just six minutes earlier. O’Connor and McCarthy pointed to confirm the verdict.

An injury-time point from Ciara O’Connor snatched a 1-9 to 0-11 victory for Wexford over Clare in an exciting encounter in Sixmilebridge.

It was a tremendous result for the last year’s quarter-finalists and current Division 2 League champions, bouncing back in style a week after a dreadful performance when shipping an 18-point reverse in Waterford.

Clare went into the game off a loss to Cork, having drawn their opener against Tipperary but they must now surely beat both Dublin and Waterford to have any hope of making the last six.

For their part, Wexford are back in the mix after recording their first triumph. Joanne Dillon’s 24th minute goal was crucial for Kevin Tattan’s outfit, as they had trailed by four points to one playing into the breeze, Eimear Kelly and Lorna McNamara (frees) slotting a pair each.

Anais Curran converted a couple of placed balls to push the Model County team ahead but scores from Linda Daly and a long-distance Chloe Morey free made it 0-6 to 1-3 at the change of ends.

The visitors got off to a jet-propelled start to the second period, shooting four points in eight minutes from Dillon, Curran (45) and the O’Connor sisters, Ciara and Aoife. Clare would not be undone easily however and drew level as they registered five of the next six points. Kelly and McNamara did the scoring for Conor Dolan and John Carmody’s side, with Curran on target for Wexford.

The leveller came from a McNamara free but when another O’Connor sibling, Sarah sent a long delivery into the Clare mixer, the break landed right into Claire’s hand around 30m out and she made no mistake to claim the victory in the fifth minute of injury time.