"It's only our second year with an adult team" 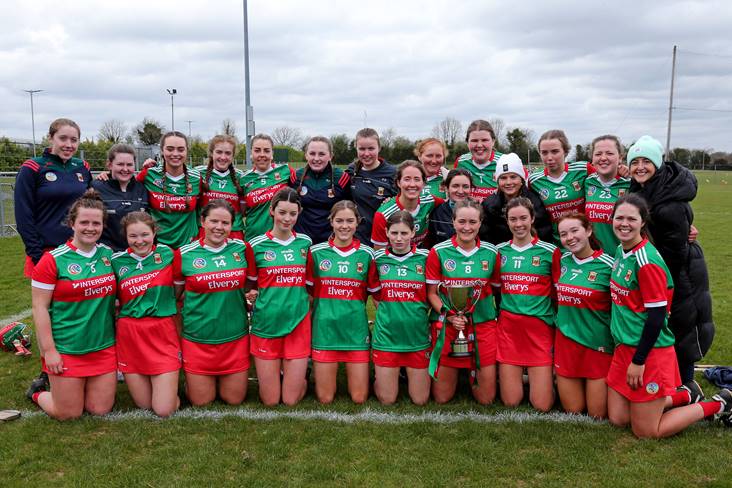 By Kieran Galvin at Coralstown/Kinnegad

Mayo’s teenage captain Méabh Delaney believes moving up to Division 3 is a major boost and she also stressed the benefits of Mayo clubs playing in Galway, the current All-Ireland senior and Division 1 league champions.

“We have younger girls coming through in Westport and Castlebar, those clubs are making big strides. Every club is playing in Galway which is a massive thing for us as a county. For girls to see an adult Mayo team; they have something to aim for rather than just minor and that’s it.”

Lisa Scahill shot the first of her two goals as the Connacht side led 1-12 to 0-1 at half-time and even though Wicklow would be assisted by the stiff wind on the change of ends, the destination of the title already looked assured.

“The one thing we talked about beforehand was workrate,” said Delaney, who contributed four points to her side’s tally.

But despite the comprehensive final scoreline of 2-14 to 1-6, Delaney said Wicklow made Mayo earn their victory. “They made it so difficult for us,” insisted the Brídeoga woman.

Mayo centre half-back Ava Lambert was chosen as player of the match after impressing throughout last Sunday’s final. “She’s so solid back at no 6. She holds the middle, she’s a brilliant player,” said Delaney of her colleague.

“Different players in different positions stepped up at different times and that’s why we got the win,” added Meabh, one of six Delaneys on the Mayo panel, who are all either sisters or cousins.