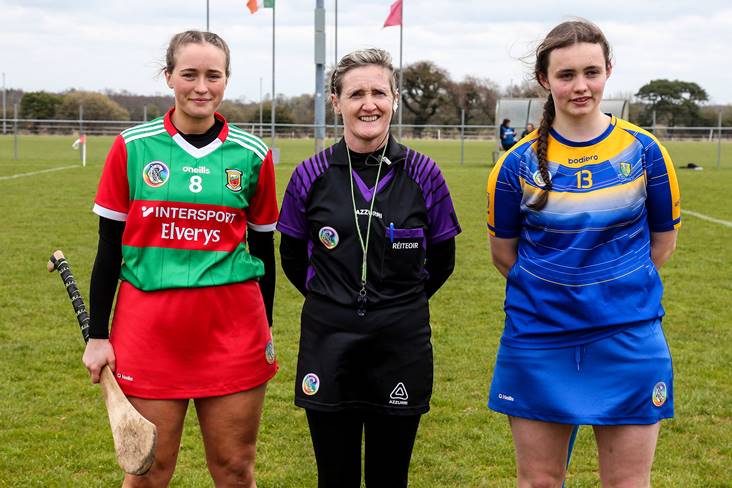 By Kieran Galvin at Coralstown Kinnegad

Mayo proved much too slick for Wicklow in the Littlewoods Ireland Camogie League Division 4 final at a windy Kinnegad on Sunday afternoon.

The Connacht side led 1-12 to 0-1 at half-time and even though Wicklow would be assisted by the stiff wind on the change of ends, the destination of the title already looked assured.

An early long-range point from the fleet-footed Fionnuala McLoughlin set the tone for Mayo and after Lisa Scahill added another, the impressive Saoirse Delaney hit four points on the trot. Two more from Scahill and one from team captain Méabh Delaney soon had Jimmy Lyons' charges 0-9 to 0-0 in front.

The game’s first goal arrived in the 16th minute, Saoirse O’Brien setting up Scahill who found the net off her left hand side.

Mayo were much sharper all over the field, as Wicklow finally got their first point courtesy of Laura Manley (18th minute). Two more points from placed balls by Delaney either side of one from Scahill gave the women in green and red a 14-point lead at half-time.

Wicklow needed a goal to ignite a comeback, but instead it was Scahill who struck for her second goal within ten minutes of the restart, blasting the ball to the net after a free delivered into the Wicklow goalmouth caused danger.

A goal from Sophie Bermingham briefly raised hopes of a Wicklow revival but with player of the match Ava Lambert leading the way for Mayo at centre-back, there never looked like applying genuine pressure.

The Garden County outfit was unable to find any rhythm in the first half but gave glimpses of their true worth in the quarter. And they continued to grab whatever consolation crumbs they could acquire, with their top scorer Laura Manley leading the way, despite getting married just a day previously!

Referee Louise O’Reilly justifiably decided to play a lengthy period of added time in the second half, but there was no way back for Wicklow despite their improved showing in the closing stages.

A superb individual point from Wicklow’s Shannon Goetelen proved the game’s final score, before Delaney accepted the Division 4 silverware on behalf of the very deserving winners.