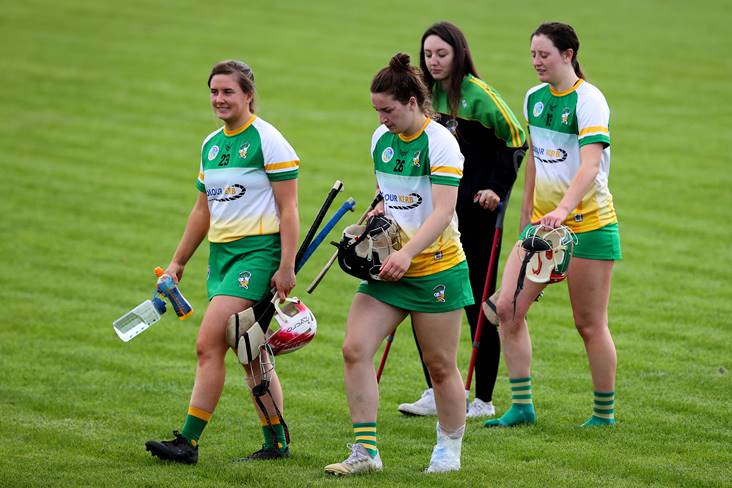 Mairéad Teehan came up trumps for Offaly, scoring 3-5 as the Faithful saved the best for last to retain their Littlewoods Ireland Camogie League Division 1 status and in the process, consign Limerick to the second tier by virtue of a 3-10 to 1-13 scoreline at Moneygall on Saturday.

Teehan’s heroics on her club pitch made her the leading scorer in the division with 4-17 but far more importantly, ensured that Offaly would continue to have the benefit of the very highest level of competition as they look to develop under Susan Earner.

Limerick are undergoing a transitional period too and they fought valiantly but just had no answer to the brilliance of Teehan.

A former Tipperary player due to her allegiance to Moneygall, just on the other side of the border, and an All-Ireland winner at U16 and minor level in the blue and gold, Teehan has relished operating in her native county’s jersey in recent years and this was a signature performance that decided a thrilling encounter.

Supporters were treated to a tumultuous opening as Caoimhe Lyons responded to Teehan’s first goal, with both arriving inside two minutes. Points followed from a Caoimhe Costelloe free, Aisling Scanlon and Orlaith Kelleher to make it 1-3 to 1-1 in favour of Limerick.

Teehan grabbed her second goal and Faye Mulrooney added points to give her side the whip hand at the interval, leading by 2-7 to 1-6. The Shannonsiders would have been closer but for a tremendous double save by Eleanor Clendennen from Michelle Curtin and Scanlon that her manager, a former All-Ireland-winning All-Star would have been proud of.

Teehan completed her hat-trick six minutes after the restart but Limerick’s risposte was impressive with five points, including two from the excellent Rebecca Delee, that made it a one-point game at the beginning of the final quarter.

Two converted frees by Teehan edged Offaly three ahead and that was the margin at the end as they retained their Division 1 status.

In the Division 2 relegation decider, Tipperary sent Kildare down by 3-10 to 2-7. Tipperary had the better of the first half and led by 0-8 to 0-3 at the change of ends. A Claire Stakelum goal opened a gap and Sinéad Meagher added two more to remove any doubt. Kildare did rally with two late goals but had left themselves with too much to do.