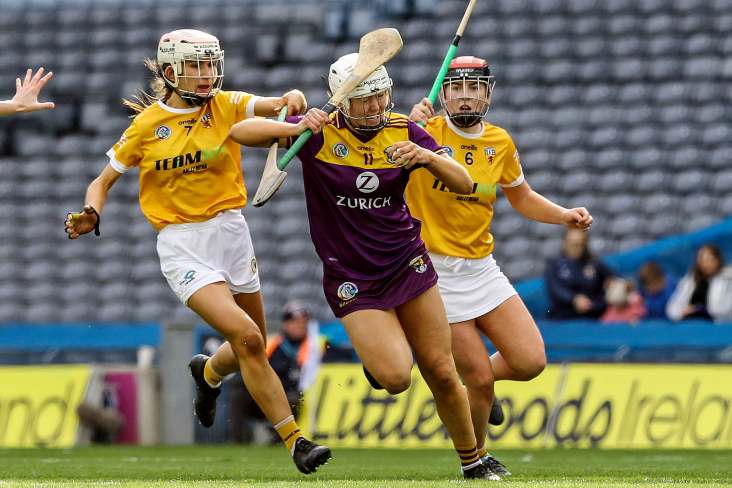 by Kevin Egan at Croke Park

Three goals inside the first 15 minutes of this evening’s Littlewoods Ireland Camogie League Division Two final left Antrim with too much to do against Wexford, who earned their return to the top tier of league action for the first time since their relegation in 2019.

Just 16 seconds were on the clock when the very first attack of the game saw Aoife Guiney power past Niamh Donnelly and bat the sliothar past the onrushing Caitríona Graham for the game’s only goal, giving Kevin Tattan’s side an early boost.

Antrim looked very sharp around the middle third and moved the ball smartly through the lines with some clever stickwork from the midfield and wing forwards, but the deployment of Maeve Sinnott as a sweeper left them outnumbered close to goal, where Siobhán McKillop and Caitrin Dobbin found it difficult to get the space to work a shot.

Seven minutes had expired when Anais Curran raised the second flag of the day from a free, but a wonderful score on the run from Caoimhe Wright showed that Antrim were adjusting to Wexford’s defensive structure by carving out space for themselves in wider positions.

Mistakes were to prove hugely detrimental to their chances of getting back on terms however, and when Chloe Drain was dispossessed carrying the ball out from her own 20 metre line, Aoife Guiney and Ciara O’Connor combined to set up O’Connor for a simple and easy finish from close range for a second green flag.

Three minutes later, Guiney again turned provider, this time setting up an unmarked Leah Walsh for a handy finish from ten metres out, and Antrim were nine points adrift and with a mountain to climb.

Two points from Róisín McCormack dragged them back into the game somewhat, the second fizzing mere inches over the crossbar as she attempted to strike for goal, but it was significant that throughout the contest, while the Ulster county picked off some highlight reel points, that was to be as close as they came to beating goalkeeper Aoife Mahon.

Their task was made even tougher when Chloe Drain was shown a second yellow card for a shoulder challenge in the penalty area, though Caitríona Graham did what she could to mitigate the damage by producing a superb diving save to push Ciara O’Connor’s penalty around the post.

The St. Martin’s player quickly got over the disappointment to slot the resultant 45 over the bar, and while there was no stage during the remainder of the game where it looked like Antrim were ever going to be over-run by their Leinster opponents, Wexford were content to pick off points and maintain that three goal advantage for most of the contest. 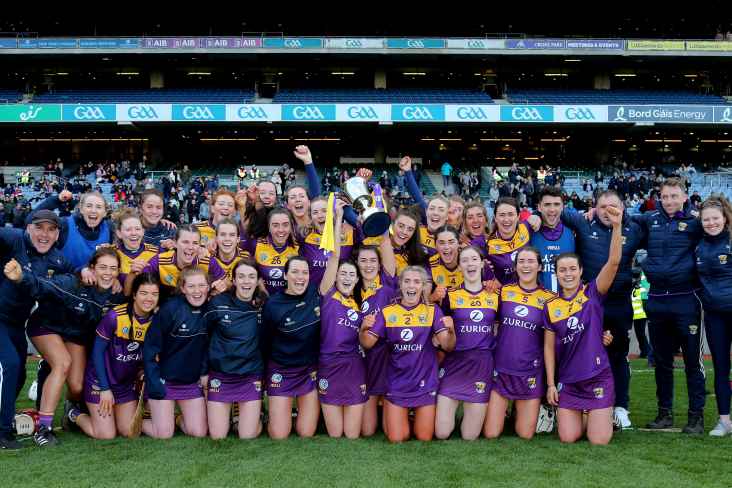 3-6 to 0-6 at half time because 3-9 to 0-7 thanks to another score from Aoife Guiney and two very neat points from Anais Curran.

If the measure of a defensive system is forcing your opponents to go above and beyond to register scores, Wexford will be delighted with this performance.

Áine Magill, Siobhán McKillop and Caoimhe Wright all picked off magnificent scores that were more than worthy of a national final, but the control that the Wexford full back line exerted close to goal meant that the close-range opportunities Antrim needed to really make their opponents sweat never came along.

As Wexford emptied their bench in the latter stages of the game, Róisín McCormick tacked on a number of late points to reduce the gap to seven, and offer further hope to the Saffrons in advance of the championship, though scores of real quality from Sarah and Aoife O’Connor ensured it was nonetheless a comfortable last few minutes for the winners all the same.