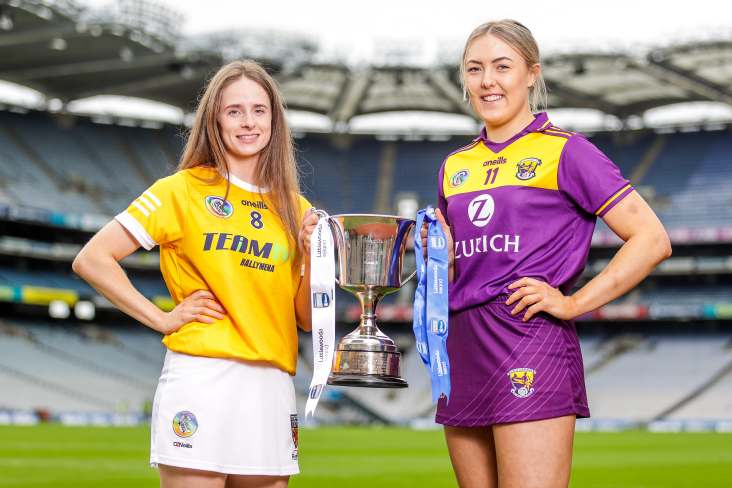 Antrim are getting very accustomed to appearing in camogie finals now and seven months after securing a long-awaited return to the senior ranks by winning the All-Ireland intermediate title, they are a game away from a place in the top tier of the Littlewoods Ireland Camogie Leagues.

They face last season’s senior championship quarter-finalists Wexford in tomorrow’s Division 2 decider at Croke Park (5.15pm throw-in – live on RTÉ 2), anxious to make amends for falling to old rivals Down late on in a thrilling finale in 2021.

The Mourne women’s consolidation of elite status in both league and championship serves as a confidence booster to Antrim and with a very good age profile, they are well placed to do likewise.

Lucia McNaughton was captain when Antrim got the better of Kilkenny in the All-Ireland.

“Everything just went to plan on the day,” recalls the NHS physio. “Everything that could have went well, went well. It’s kind of surreal because we were even chatting about it the other day, still going back and watching the match, and looking at the photos, that it actually happened. It still hasn’t really sunk in. And then now to be able to play again in Croke Park, is just…”

McNaughton struggles for the right words but it’s not that it was a shock. They have worked for this. But to realise a dream is no small thing.

Of course that she got to lift the trophy on the day of her 26th birthday was the cherry on top, though perhaps joining an illustrious family catalogue of All-Ireland winners provided an extra helping of cream.

McNaughton’s late grandmother, Mary McGarry was an 18-year-old when Antrim completed the All-Ireland senior three-in-a-row in 1947.

Her father, Seamus, or ‘Crow’ as he is called around Loughgiel, was part of the legendary Shamrocks team that won the All-Ireland club hurling title in 1983.

And her brother, James was involved as Antrim garnered Joe McDonagh Cup honours in 2020.

The skipper of the camogie team wants more though and it is promising that they have maintained the momentum from year despite joint managers, Paul McKillen and Jim McKernan standing down. Elaine Dowds, who was part of the backroom set-up, has stepped into the plate and it looks like business as usual.

“Elaine is still in with us, which is great because she knows everyone. Joe (Passmore), Shane (Elliott) and Brian (Kearney) and a few of the other backroom team are with us now, there is also new players on the panel which is great. It is a different year.

“Paul and Jim had mentioned to us that they would probably step away after the season. You know, it is a huge commitment. And we were very happy with the commitment that we had from them over the past two years. It was a very difficult year with Covid and everything. It was different. I’m just glad that we were able to finish on a such a high for them.”

A foot operation has kept Maeve Kelly out all season and it remains to be seen if she could play any part in tomorrow’s outing. Corner-back Chloe Drain is also a doubt after having to be withdrawn in the first half of last weekend’s dramatic semi-final victory over Cork.

Róisín McCormick and Kelly have been tormenting teams at every level since linking up as early teens and McCormick has done most of the heavy lifting up front in Kelly’s absence. She was absolutely sensational in that triumph over the Leesiders, scoring 2-7 in the first half, the two goals emanating from the top-drawer category.

That contribution helped the Saffrons lead by 12 points at half-time but in the end, they had just two to spare.

“Cork threw everything at us. I have never been more relieved to hear the final whistle. We played very well in the first half and we just couldn’t get to grips with the second half. Cork were just coming at us from all angles. But happy enough to grind it out really. Hoping that that really tough and intense match will stand to us now on Saturday.”

McCormick’s heroics came as no surprise to McNaughton but she is keen to stress the team contribution too.

“It was really nice to watch. I would play with Róisín at club level as well. To see her perform like that was great. And the movement, even the movement of our whole forward line in the first half to allow Róisín that space and then her getting it, it was really and truly great to watch.”

Wexford are a team they haven’t played before in recent seasons. Having overcome another side that reached the final six of the senior championship last year in Waterford, and with Antrim now a senior team too, it is a testament to the rising standards of camogie.

“We are under no illusion that it is going to be a very tough match. It will be highly competitive but we will just concentrate on ourselves see what happens.

“Division 2 is so competitive anyway because there obviously is that incentive to go up. But even from last year, this year has been even more competitive. Waterford came down last year and Wexford beat them this year, it just shows you that everything can change very quickly so we have to try grab this while we can.”