"Our dads would have played together for Tooreen - it's just normal" 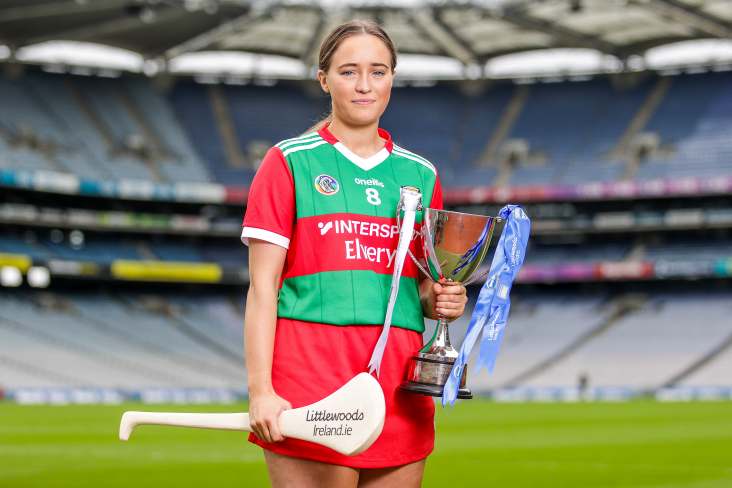 Name a team that began a season with a complete panel of debutants and finished it as All-Ireland champions? The answer is the Mayo squad of 2021 that marked the county’s return to adult camogie by winning the Nancy Murray Cup for the All-Ireland junior A championship.

It was one of the storylines of the season and central to it were the Delaneys from Coolnaha, in the parish of Aghamore.

Méabh – vice-captain of that team and promoted to full captaincy this season though still a teenager who doesn’t turn 20 until the end of the year – was joined by her sister Saoirse in the group. There were two more sets of Delaney siblings in Ciara and Emer, and Gráinne and Caoimhe, and the three pairs are all first cousins.

“We’ve played with each other all through the age groups,” says Delaney. “All of the family would kind of be involved in the hurling club here. Our dads would have played together on the senior team for Tooreen. It’s just normal, we don’t really notice it too much.

“We are just so used to it now, it’s kind of just another game, another teammate that we are playing with around the pitch. It would be good though; I suppose we are able to communicate fairly well with each other. Give out to each other if you need to and you don’t take it personally,  if you need to be told to do something.”

Those post-mortems can be lively, as Delaney reveals with a chuckle.

“We can be harsh critics. But I suppose that kind of helps as well. You are told when you need to work on something. But you are also told then when you play well. It’s a good balance, I think, to have a bit of both.”

A photo appeared in the Mayo News last month of the six girls with their grandmother Ann Marie, who has 33 grandchildren in total. In the accompanying interview, Ann Marie spoke of her pride in their achievements.

Given the isolation and worry endured by the elderly through Covid, it is no surprise to learn that these feats brought considerable succour to Ann Marie, whose late husband George was involved in the foundation of Tooreen Hurling Club in 1957.

“It definitely is nice to for Nana having the family pictures and that. Ah she loves it… getting them framed as a present and stuff like that. It’s great.

“We’d all live kind of fairly close around her. And she’d be very sociable; in the kitchen she would have everyone around and stuff like that. It definitely was a big change when people couldn’t go visiting.

“She doesn’t want us to be not going on with our lives. So she is kind of happy, even for us, that we’re just able to get on with it and get back to normal now.”

Delaney, who starred as Na Brideoga annexed the All-Ireland junior B club title in 2019 and has also enjoyed underage success with Mayo, is currently studying History and English for her Arts degree in UCG, with a view to moving on to teaching afterwards. Galway is familiar territory for long before Mayo resumed competing, Na Brideoga were intent on providing a good level of camogie for their players and so crossed the border to provide it.

“There has always been camogie around the place really. Because we are playing in Galway, we always had a good level of camogie to be playing. We are junior now at the minute in Galway. That helped a lot.

“I can’t remember really a time where we weren’t in Galway. We are playing there for years now. It’s brilliant. We’d a match at the weekend and they are tough, tough games. Even for the younger girls to be starting playing at this level, it is really good.”

Youth is the order of the day with Mayo, with Delaney herself in and around the median age group. There is no one older than 24, while among the key cogs are 17-year-olds Emily Kelly and Fionnuala McLoughlin. A few have Leaving Cert this year, with the majority in college. Plenty have football commitments too. It can be hectic.

They reached the semi-final of the Littlewoods Ireland League at the first attempt and built on that to enjoy championship glory. That momentum has continued and they face Wicklow in Sunday’s Division 4 final at Coralstown Kinnegad (throw-in 1pm – live stream Camogie Association YouTube channel).

“To get to the All-Ireland final our first year and win was brilliant. It was just a great experience really. It was nearly a shock that we did it in our first year. We were all thrilled to be now up in (premier) junior competing only our second year with an adult team. And even we have a huge number of younger girls now up again and sure they are only looking forward to the league final now.

“We played (subsequent champions and this year’s Division 3 finalists) Cavan in the semi-final for the league last year. They were a level up from the teams we were playing in Nancy Murray. It was a good experience and

“We played Wicklow a good bit underage. A lot of girls would be familiar. Even the minors played them in the All-Ireland C final a few weeks ago (won by Wicklow). We played them a couple of weeks ago in the group stages (winning by six points after a quick start). It was a tough game. We kind of know what we are expecting; it will be a fairly physical and tough battle but hopefully we will be well-able for it and prepared for it.”