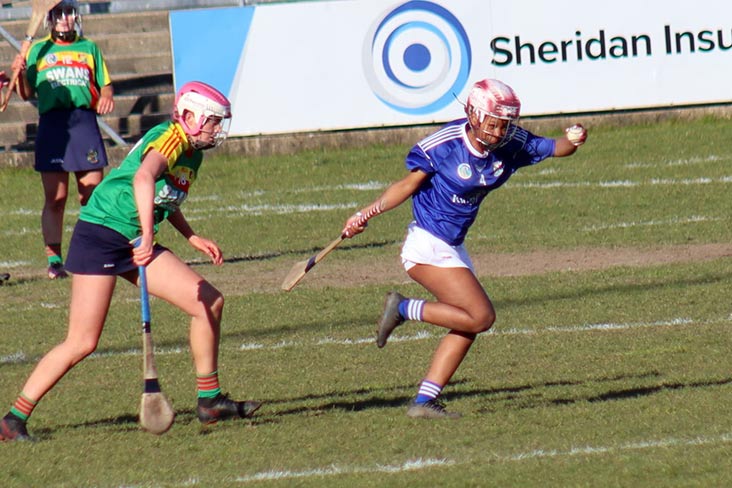 Gaelic games have been fundamental in the integration of migrants to what is now a far more multi-cultural society and Nomonde Majola is a shining example of the positivity of that process.

Indeed the 21-year-old South African native has made such a good transition that she is now a year away from being fully qualified as a secondary school teacher, is corner-back on the progressive Cavan camogie team taking on Dublin in the Littlewoods Ireland Camogie League at the National Sports Campus in Abbotstown today, and a very good ladies footballer to boot.

Majola’s sunny disposition and outlook have undoubtedly contributed but she acknowledges the help and patience of peers and coaches that have brought her to this point despite being a relatively late starter.

Speaking during the week ahead of Cavan’s final Group 2 tie, with a place in the Division 3 final on April 9 against Wexford already assured, the sticky defender detailed her journey.

“We’re originally from a small town outside Durban called Kranskop. That’s where I grew up,” explains Majola.

“My dad got a job in the local factory here in Liffey Meats. So he came over and then Mam came over just to visit him, we weren’t even meant to come over permanently. And then all of a sudden ,we were all just moving over to Ireland, into Ballyjamesduff. I always get asked that question, ‘Of all places, why Ballyjamesduff in Cavan?’ It was very random but sure I was put in the right place, I’m happy enough with it now.

“I think I settled in straight away, just the fact that I was so young. I didn’t really have any second thoughts of it. In terms of my older brothers, they were that little bit older, they were 13, 14, 15 coming in. It could have been different for them. They had their friends made. When I was there, I was six or seven so I just took it all in.

“I couldn’t imagine any different. For me it’s like my normal, it’s my home. I would have been in primary school and then I went on to secondary school as well. That is where I made my friends and they just happened to play camogie… I was told to get a stick and a helmet and show up to training with Denn. That’s how it all began.”

Majola emphasises the social benefits for her of that involvement in Gaelic games, and the positivity of that experience. And while we will never be completely rid of idiocy and ignorance, and the colour of her skin has sadly attracted some tasteless and hateful remarks, they have been outside of that sporting environment.

“I think it was the people that were around me as well. I think I was a part of them. In fairness, I haven’t come across anything too negative. In the sports field, I have never ever come across anything like that. But obviously in your normal life and everyday life, there is things that do come up and you’re like, ‘Right. Okay.’

The Majolas returned to Kranskop to visit family in 2016 and Nomonde found the interest in the Cavan, Denn and Castlerahan jerseys she wore very funny. She was bringing a bit of Breffni to the Thukela River valley.

Meanwhile, she finds herself coming out of her shell more on the pitch now, particularly in camogie, as her self-belief grows. She is helped by the likes of Erinn Galligan, skipper of Cavan’s history-making All-Ireland Junior A championship-winning panel of which Majola was a member in 2020, who as full-back, is literally on her right shoulder throughout games.

“She is something else to be honest. She always knows the right thing to say… There are so many of the older girls. It’s so nice to come on as a younger girl. They have so much to teach you. They do it in a way that you can kind of become confident in yourself as well, and in your own ability.

“There are so many leaders on the pitch. But they make you believe that you are one of those as well. “I wouldn’t have had camogie in primary school and my club Castlerahan is a ladies football club. So I started camogie with Denn which is the next club over in Crosskeys. So whereas the camogie came naturally to a lot of the girls, it was something I really had to work hard at.

“I have one friend now, her name is Shanise Fitzsimons, she would be my clubmate. Her skill level, compared to anybody else, she is just at another level because she started really young. So I suppose it was very daunting for me at the very start. I was like, ‘Oh my God, I will never be able to get to that stage or even hit the ball.’ But after a good few years of training I kind of got to some stage of, you know, being okay.”

She is far more than that as evidenced by her displays nullifying opposition forwards. Her family is certainly enjoying her achievements with her sports-mad father Philani, mother Goodness and siblings Daniel, Lindo, David and Thobile getting to as many games as they can, even if they may wonder at times what hallucinogenic substance led to camogie’s creation.

“Mam and Dad work but go to games when they can. They absolutely love it, especially Dad, he would be far more inclined than Mam with sport. My brothers played a bit of Gaelic but never took it too seriously. My sister Thobile, you couldn’t get her to play at all! Dad’s preferred sport would be soccer but he just loves the fact that I’m out and doing something. In fairness, he’s really interested in the sport. He thinks it’s mad obviously, but he gets such enjoyment out of it anyway. He always supports me.”

With a BA in her pocket from Maynooth, and now in the first year pursuing an Education Masters at UCD that includes a placement teaching English and Geography in Virginia College, life is good on and off the pitch.

Majola is anxious to help Cavan continue to rise through the ranks. It is something she believes is possible despite the small pick of players, because of the environment facilitated by manager Philip Brady, and the gradual increase of interest in the code since they fielded for the first time in a decade in 2020.

“We had been playing camogie a lot at club level. It was always kind of baffling to us that there was never a county team or there hadn’t been one in a while. It came back and it’s been going really well.

“I always liked camogie. And it’s kind of different as well because I think camogie, especially in Cavan, it would be such a small community. Football would be first and foremost everywhere in Cavan. We just have the love and passion for camogie and want to keep playing it, to bring it that step further.

“Even in school, it’s been mentioned a few times how we are getting on. We have had a really nice start to the league. People are starting to say, ‘Youse are getting on really well.’ It’s kind of nice getting that buzz going around us as well. I have students asking about it. It’s nice to hear.

“Beating Armagh in the first round gave us the confidence to actually think we could go out and beat other teams and we’re looking forward to the final but we want to get a good result against Dublin.

“With the management we have had this year, every single girl that is in there has gotten their chance. There is no girl that’s kind of left behind. Every girl knows that if you are not performing another girl can easily take your place which is really, really good. Philip is very fair in terms of what he says, he says it out straight and I think that is very important as well. Just being direct as a manager.”

No doubt about it, Cavan have made giant strides. If they travel as far as their resolute defender from Ballyjamesduff-by-way-of-Kranskop, the next few years will be very exciting indeed.