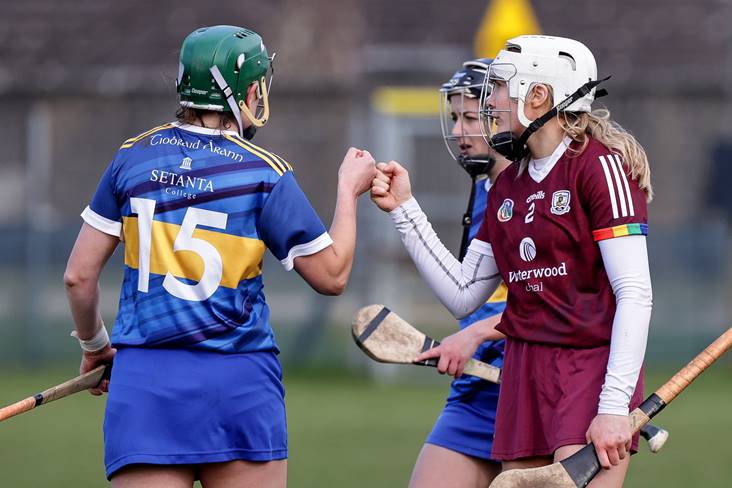 A pointed free by Rebecca Hennelly in the eighth minute of injury time gave Galway a 1-11 to 0-13 triumph over heroic and heartbroken Tipperary in the Littlewoods Ireland Camogie League in Ballinasloe.

The free was a hotly-contested one by the Tipp management after Claire Hogan was adjudged to have charged into Sarah Dervan but referee John Dermody stuck to his guns and Hennelly held her nerve from outside the 45 and close to the sideline to hit the crucial score that gives Galway a place in the final against Cork on April 9.

It was dreadfully hard on the Tipp outfit, who had pushed the All-Ireland champions all the way in last year’s championship semi-final, having previously done the same in the penultimate stages of the League against Kilkenny.

Two years ago, they produced a fantastic backs-to-the-wall effort to beat Galway and book a place in the League decider, only for Covid-19 to lead to the competition’s cancellation.

Had they prevailed on this occasion, it would have been one for the annals as they played 55 of the 70 or so minutes with 14 players, 38 of them into a very strong wind, after having Casey Hennessy sent off following an altercation with Aoife Donohue. Like the definitive free, it was a call that did not meet with the approval of the Premier contingent.

Hennessy had already scored two point by that juncture and was a huge loss, while Cáit Devane had to be relocated further out the field as a result and Galway obviously had more cover defensively as a result.

It was the 47th introduction by Cathal Murray of the Sarsfields siblings Orlaith and Siobhán McGrath that turned the game on its head, however.

Two minutes later Orlaith went on a trademark run that drew the cover to supply her younger sister for an equally familiar goal finish. Orlaith took delivery from Donohue to point almost straight after and the sides were level, 0-12 to 1-9.

Devane drilled over her seventh point of the day from a free to restore Tipp’s slight advantage as Julieanne Bourke, Mary Ryan and Aoife McGrath defended resolutely but Hennelly repeated Devane’s first-half trick of finding the target from within her own half to bring the sides level once more.

Both sides had opportunities to get their noses in front but when Dermody signalled for a free after Hogan, in possession, collided with the recently-married Dervan, making her first start of the campaign, Hennelly delivered the goods for the Maroons.

Tipperary led by 0-9 to 0-4 at the change of ends but that did not look enough given the strength of the wind and their numerical disadvantage. They had begun well and with so much at stake between the group’s two unbeaten sides, it was no surprise to see the players tearing into one another with such relish.

Carrie Dolan and the industrious Niamh Hanniffy added to the Tribeswomen’s tally as Tipp wobbled slightly after Hennessy’s dismissal but Bill Mullaney’s charges finished with the two last scores of the game from Devane, including one monstrous effort inside her own 65, to give themselves something to defend.

Keane was among those on the mark as Galway reduced the margin to three after nine minutes of second-half action but Tipperary redoubled their efforts and after a quite astounding score from Clodagh McIntyre moved five in front. Hanniffy reduced that by one, again after good play from Keane, and it was time for the McGraths’ introduction.

It was pure drama from there to the end, when Galway emerged victorious, leaving Tipperary crestfallen for now but surely more certain than ever now that they can challenge for big-time honours before the year is out.