Murphy and McWilliams on trial with North Melbourne 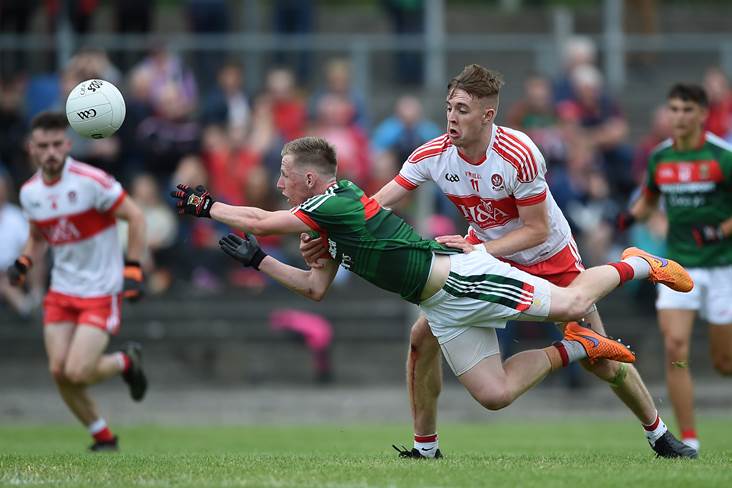 AFL club North Melbourne are looking at the possibility of recruiting their first GAA player for a decade, with Red Óg Murphy and Oisín McWilliams spending this week on trial with the Victorian outfit at their Arden Street base.

McWilliams was a star of the Derry team that reached last year's All-Ireland minor football final, along with twin Lorcan.

Both were on the U20 squad that won the Ulster Championship this season, with Oisín operating at midfield once more, where he combined a tremendous engine with a significant scoring prowess.

The Swatragh man is the third member of the Oak Leafer U20 team to catch the eye of AFL scouts, with Callum Brown and Anton Tohill, son of Derry legend Anthony and clubmate of McWilliams, already invited Down Under.

Brown is understood to have been offered a contract by Gold Coast Suns, while a number of clubs have expressed an interest in looking at Tohill at a training camp.

Meanwhile, Murphy garnered attention when contributing 11 points, including four from play, as Sligo lost by a point to Derry in last year's All-Ireland minor quarter-final.

"They will spend a week with us and will experience the full football programme here at Arden Street, including all training sessions and meetings," said Roos footy boss Cam Joyce of the duo, who would be eligible to be recruited as Category B rookies.

"The boys will also be invited to our final game of the year against St Kilda on Sunday if time permits before they head back home."

Laois forward, Conor Meredith is the last Irishman to be signed by North Melbourne as an international rookie at the end of 2008 but he was unable to make the breakthrough and was released at the end of the 2008 season.

The Kangaroos gave trials to subsequent multiple All-Ireland medallist with Dublin, James McCarthy, as well as Cavan underage star Barry Reilly but neither made the switch.