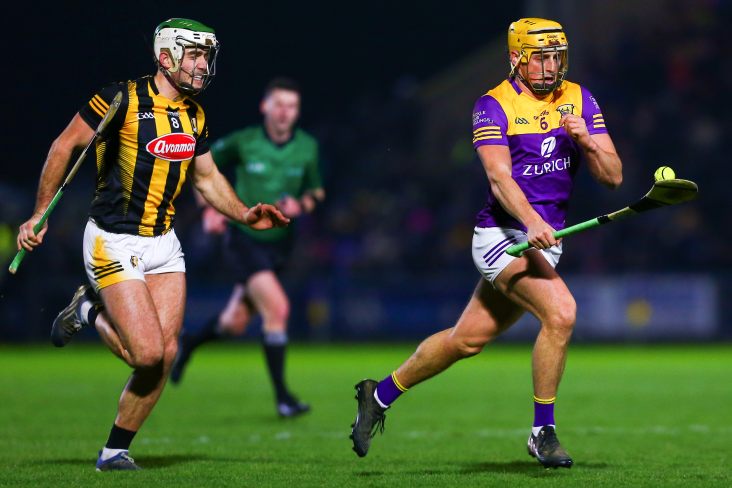 Richie Lawlor struck for a late goal as Wexford overcame Kilkenny by 1-25 to 2-18 under the new floodlights of Chadwicks Wexford Park tonight.

A huge crowd turned out for the third-round Walsh Cup clash at the Wexford Town venue where there were fireworks to help mark the occasion of the official switching on of the new lights.

Conor McDonald and Lee Chin sent over three points each for the hosts as they went on take in a 0-12 to 0-11 lead at the break.

The Model men started the second-half in decent fashion too, outscoring their opponents by 0-4 to 0-1, but Tom Phelan’s goal brought the Cats right back into it.

Derek Lyng’s men would get level prior and, despite shipping two points, they’d be ahead come the 59th minute when Bill Sheehan struck in their second goal.

Conall Clancy’s point squared things again prior to Lawlor’s intervention in injury-time (see below) and a point from Conor Hearne that followed to put a seal on Wexford’s victory.

Drama in a sold out Wexford Park.

Jarlath Mannion’s goal on 16 minutes was part of an unanswered 1-5 salvo for the Tribesmen as they went in at the interval with a comfortable 1-15 to 1-9 lead.

After the turnaround, Henry Shefflin’s side sent over the first five points before Antrim got life again through an Eoin O’Neill goal but there’d be no denying the men from the west on this occasion.

With Galway safely through to the competition’s final next Saturday, Wexford, Kilkenny and Laois all remain in the hunt for the other spot in the decider with the O’Moore men needing a win against Offaly tomorrow in Tullamore (2pm) to keep their hopes alive.