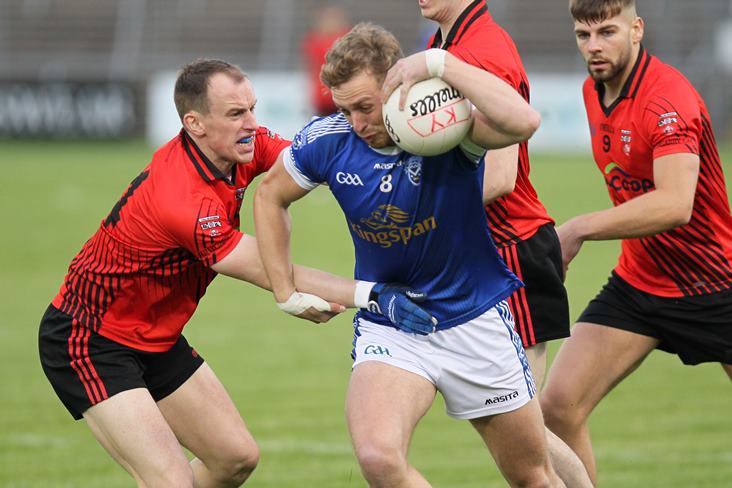 Killygarry's Martin Reilly gets a tackle in on Kingscourt's Padraig Faulkner

Six teams remain in the hunt for the Cavan senior football championship after this weekend’s quarter-final clashes.

Crosserlough booked their slot into the last four last night thanks to a 4-18 to 0-8 demolishment of Lacken at Kingspan Breffni, while earlier today Killygarry came through in a cracking contest against Kingscourt Stars at the same venue.

Conor Smith’s free in the fifth minute of injury-time sent the Crubany men into the semi-finals at their Meath border opponents’ expense, winning out on a 2-16 to 2-15 score-line, as they now await the winners of Ramor United and Mullahoran for a place in the final.

Holders Ramor were denied another place in the semis after the Dreadnoughts kicked the last four points in Cavan Town, including Enda O’Reilly’s equalising free, to leave it at 0-10 apiece when the final whistle sounded.

The opening game of the weekend saw Cavan Gaels and Gowna finish all square on 1-12 each in a game which saw the Gaels surrendering a six-point lead and having to snatch the draw in injury-time through Evan McIntyre’s point.

Details of the quarter-final replays are set to be confirmed at a later date.

In the relegation battle, the county’s last two intermediate winners Ballinagh and Butlersbridge will battle it out for their senior status after losing out to Laragh United (2-18 to 0-13) and Lavey (0-13 to 0-9), respectively.