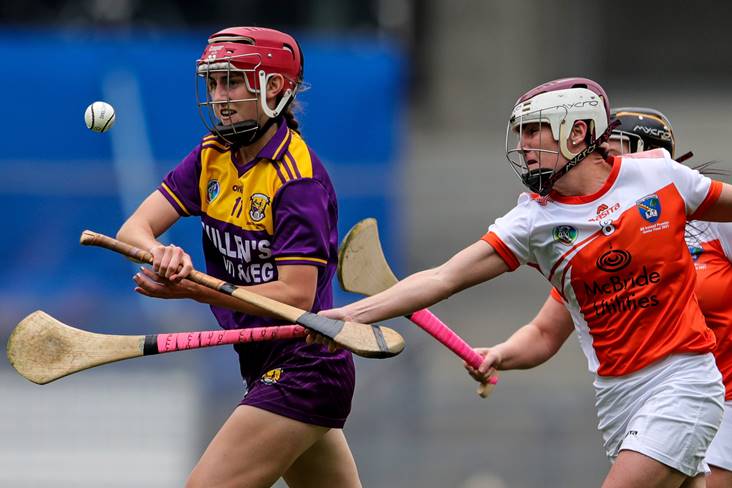 Seven points from Chloe Cashe and a terribly unlucky own goal by Nicola Woods were among the features, but Wexford finished just the stronger to grind out victory in a thrilling All-Ireland Premier Junior Camogie final against resolute Armagh.

The Ulster crew were champions last season, when no second teams were allowed due to the Covid-19 restrictions but had lost three times already to the Yellowbellies this season, including in the Division 3 League final.

They were in contention right to the bitter end, when dropping one final free into the mixer but could not get the goal they needed to bring this one to a replay.

From the start, Armagh looked to turn the Wexford defenders around with a direct game to the forwards, who then took their steps and put the sliotar on the hurley.

The tactic yielded tremendous dividends, often from frees by the brilliant Ciara Donnelly, who clocked up ten points, and it might have had an early goal but referee Kevin O’Brien had called the play back for a free after the five seconds for advantage had elapsed.

Cashe shook off an injury from the throw-in to convert a couple in response to Donnelly’s early scores but the Armagh skipper clocked up a brilliant score from play when finishing a strong run by booting over off the bas.

The Orchard girls were dominant in this opening quarter, but there was a large slice of luck to their goal when it came, Eimear Smyth’s low shot slipping under Lara O’Shea’s hurley on the line to put a goal between them at the first water break, 1-4 to 0-4.

Wexford resumed with far more vigour however and became a constant threat with their own running game, which Armagh were unable to cope with. Alan Brennan’s side ended with a goal but how it wasn’t more could be one of life’s great mysteries.

They probably should have had four and could have had six. Twice Ciara Banville eschewed Emma Codd in splendid isolation in front of the Armagh posts and shot over on each occasion.

Another time, Aideen Brennan overhit a hand pass to the full-forward, while the St Martin’s attacker when she did get the pass, had two powerful shots saved sensationally by Ciarrai Devlin, one tipped over for a point.

When the goal did come, it was even more fortuitous than Smyth’s, which was ironic given the opportunities they had created.

It was Lisa Firman, already on the scoresheet, whose shot hit the upright. Banville raced onto the rebound and got to it just ahead of Devlin. From the press box, it was clear that her ground shot was heading inches wide but the retreating Woods would not have had that luxury.

The full-back managed to get her hurley to the sliotar to jab it away from the posts but her the momentum of her sliding body shoved it into the net.

Still though, Armagh were only two points behind at the interval, thanks to a brace of pointed frees by Donnelly, including one from a very tight angle to make it 1-8 to 1-6.

Within two minutes of the restart, they were ahead, the talisman had them ahead with three more converted frees, the last from outside the 65m line after she had again won it with a bit of genius.

Tremendous credit must go to Mattie Lennon, and the defenders themselves for the way they shut down those gaps, much of it down to greater workrate further out to offer better protection.

But ultimately, Wexford were able to chisel out a few more scores after Ailis Neville cut in from the right to equalise and they had edged back in front by the second water break, 1-11 to 1-10.

Ciara Hill levelled in the 51st minute but Armagh couldn’t score again, while Wexford finished with a massive score by Brennan, another from sub Muireann Fitzpatrick and a final score from a 45 by Cashe.