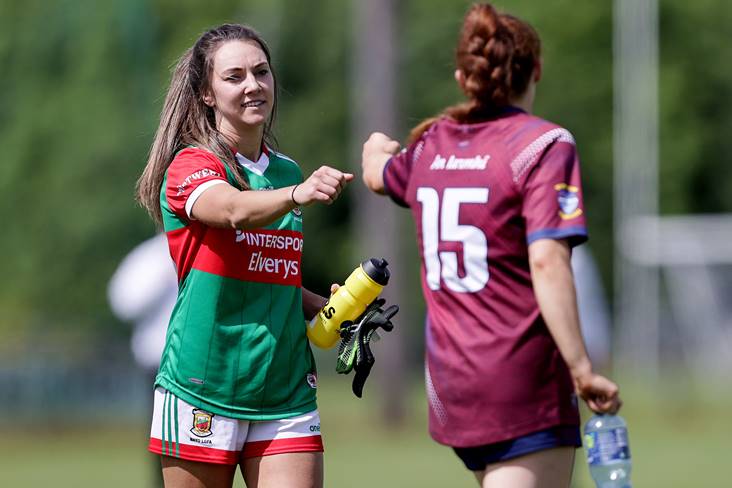 The final round of group fixtures over the weekend confirmed the last four pairings.

The LGFA will reveal venues for the games later this week, with Donegal facing Cork at 3pm live on TG4, while the meeting of TG4 All-Ireland champions Dublin and Mayo (5pm) is being streamed on the Spórt TG4 YouTube page.

Karen Guthrie and Geraldine McLaughin were in devastating form as Donegal soundly defeated Galway by 4-21 to 2-10 at Tuam Stadium. Cork needed to fend off a late rally by Waterford to claim their 2-11 t0 2-8 victory at Fraher Field, with goals from Bríd and Ciara O’Sullivan key to their win.

Mayo were very impressive winners over Westmeath with goals from the Needham sisters Tara and Ciara in their 4-18 to 0-6 win, while Siobhan Killeen and Caoimhe O'Connor’s strikes gave Dublin victory over Tipperary,

Meanwhile, Westmeath will play Tipperary in the Division 1 relegation play-off, with the losers of that tie set for Division 2 football in 2022.

In Division 2, meanwhile, it will be Kerry against Monaghan and Cavan versus the winners of this evening’s game between Meath and Clare in next Saturday’s semi final, while Wexford and Tyrone will contest the relegation play-off.

Louise Ni Mhuircheartaigh scored a first-half hat-trick for Kerry, who were 6-14 to 2-7 winners over Wexford at Fitzgerald Stadium. Cavan edged past Armagh by 2-12 to 1-14, to top Division 2B, while Monaghan stormed to a 5-15 to 1-11 win against Tyrone.

The Division 3 semi-final pairings will see Sligo play Kildare and Laois up against Roscommon, with Fermanagh and Wicklow set to lock horns in the relegation play-off.

In the all-Connacht tie Sligo edged past Roscommon by 0-13 to 0-11, while Down condemned Fermanagh to the relegation play-off following their 1-17 to 2-12 win.

Kildare left it late to tie up their 0-10 to 0-9 win over Longford, while Wicklow’s 2-9 to 1-11 win over Laois wasn’t enough to avoid the relegation play-off.

And in Division 4, it’ll be Leitrim against Limerick and Offaly against Louth in the semi-finals. Today there were wins for Louth over Derry, Leitrim score five goals in victory against Antrim, while Limerick edged into second place in Division 4B with their 2-6 to 0-8 win over Carlow.