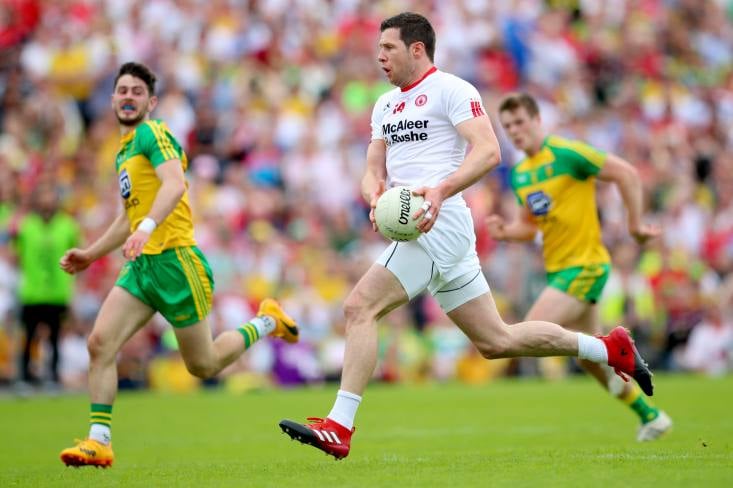 Former Tyrone star Sean Cavanagh came in for some high praise on Twitter last night after the latest instalment of Laochra Gael followed his glittering career.

Cavanagh picked up three All-Ireland SFC titles, five All-Stars and a Footballer of the Year award during his inter-county career which spanned 16 seasons with the Red Hands.

In last night’s episode on TG4, the Moy clubman reflected on his success and his sacrifices during is playing days.

Here was some of the reaction during and after last night’s programme:

Without doubt one of @TyroneGAALive finest ever Sean Cavanagh , another great Laochra Gael @GAA_BEO

Another great effort from @SportTG4 & @Laochra_Gael. There's no doubt that Sean Cavanagh is in the upper echelon of the Tyrone greats. Player of the year 08, 5 All Stars, 3 AI Senior medals, 6 Ulster Senior medals, an AI minor, & record Tyrone appearance holder, he's done it all.

#LaochraGael great watch on Sean Cavanagh. Incredible player!! Unplayable in full flight.. that dummy was madness.. ruined many a man!! 👏🏻👏🏻👏🏻

There's something really fascinating and impressive about Sean Cavanagh. Always a brilliant footballer but even more eloquent off the pitch. Seems very much his own man and it's impossible not to warm to him. #laochragael

Another brilliant @Laochra_Gael. Sean Cavanagh was an amazing footballer, second only to Peter the great on what was a superb Tyrone team. Some servant to the Red hands.

@Laochra_Gael gives such a brilliant insight into legends of the game. Great programme tonight with Seán Cavanagh #LaochraGael

Brilliant #LaochraGael again tonight on @SportTG4 #SeanCavanagh what a player, what a warrior who loved representing his county, some man to kick a long range score, soldiered on through injury but always aimed high, 3 All-Ireland medals in the back picked, great role model too

Broke Kerry hearts a few times but what a player Sean Cavanagh was. Had everything you'd want in a footballer. #LaochraGael