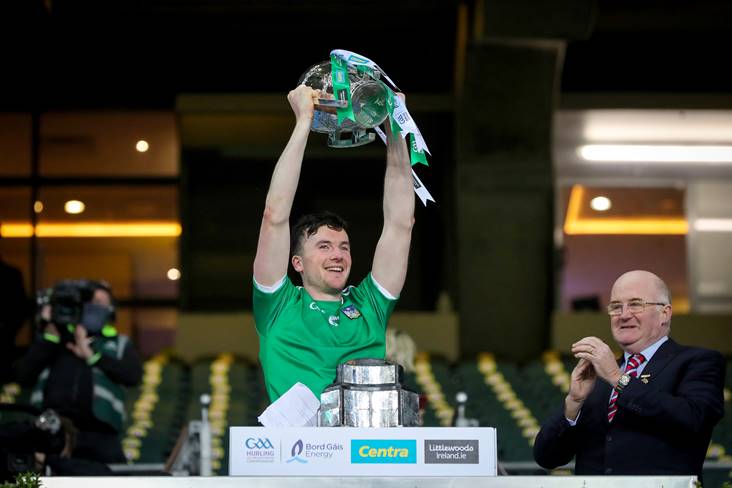 2 years apart, but so alike!! pic.twitter.com/3WJxHoxnRv

Limerick from start to finish 👌🏽 last year gave them the hunger. GH MOTM ✅

Nickie Quaid plays a near perfect game every day for Limerick. He never makes a mistake. Goalkeepers have to be respected in the same context as outfield players & he has to be strongly recognised as a HOTY candidate along with Gearóid & Tom. #LimerickGAA @LimerickCLG #GAA 🐐

Unbelievable performance from Limerick 🤯Hegarty MOTM and HOTY serious display.!! Class speech from @DecHannon to top it off 👏🏼👏🏼

What a performance @LimerickCLG absolutely outstanding, so much to admire about this team. 👏🏻👏🏻👏🏻

Am I alone in thinking this was a terrible game -
Save Limerick’s excellence.

No Goals, though some Gr8 Goal Keeping, #borefest

And on the subject of Brexit, this is the best sport ever and if the Irish had colonised the world, nobody would ever have heard of football https://t.co/8ZkfPiVxX9

What a send off by St. Patrick’s GAA Club members to Gearoid Hegarty when he left his home in Rhebogue this morning pic.twitter.com/yd1Bb1DptC

It was some game.. so many brilliant players on both sides. Brilliant skill levels, vision and execution. Fair play Dec Hannon, J Kiely and Limerick. Be some lock ins this week😜😜👌👏🏻🍻🍻🍻🍷🍔🥃🥃

We were beaten by the better team no shame in that .
Limerick are a fantastic team. Deserving all Ireland champs.
Hayes , Hegarty, Tom Morrissey incredible today

We were privileged to be asked to participate in today’s @officialgaa Hurling Championship final. View the image of a winter sunset on All Ireland Sunday over a poignantly empty @CrokePark @defenceforces @LimerickCLG @WaterfordGAA @offtheball @Independent_ie @IrishTimes pic.twitter.com/9UJbTh6Quq

Great year overall for @WaterfordGAA and Liam Cahill has done a great job. Bitterly disappointing to lose a final but they can hold their heads high this evening. https://t.co/6qaRIZUFG8

On the 12th day of Christmas.

Gleeson give to us...

What a game. Well done to @AontroimGAA ,Liam McCarthy beckons, kids of Belfast will be inspired. I was up there with @SkySportsGAA last year, Hurley’s everywhere, they love the GAA more than most. @CasementPark open soon, time to capitalise. Kerry will be back, heroic effort.

A fantastic season for the Saffron hurlers with promotion to Division One already achieved, they will play in the Liam MacCarthy Cup in 2021! pic.twitter.com/NiGs2ou95Y

The Joe McDonagh final should be on every year before the Liam MacCarthy. No offense to minors but it's more important the GAA work harder to showcase the kind of quality that is now there.

Surely to god RTE could give 2/3 mins for the Antrim Captains speech!!

Couldn't be happier for this man Brian. Management Team and girls, you were just fantastic. Congrats to both team, it was some game of Camogie.. pic.twitter.com/9UPT9FDUen

Congratulations to all @KilkennyCamogie on a fabulous victory tonight 👏👏 a performance full of determination, character and skill 🏆🎄 https://t.co/VroB499RDF

Well done Girls - huge congrats to mgt and the team. Worthy Champions. Been coming for a while https://t.co/pgqMP3Ay19

On this All Ireland final hurling day Sligo GAA are delighted to announce the appointment of our 2021 hurling manager Padraig Mannion with his team of Donal Tully, Declan Molloy and Darragh Cox.
Sligo will compete in Roinn 3b and Christy Ring cup.
Good luck to the team and mgt pic.twitter.com/v8lFLa5Tph

One of the greatest https://t.co/Q0ugBQo1Ab