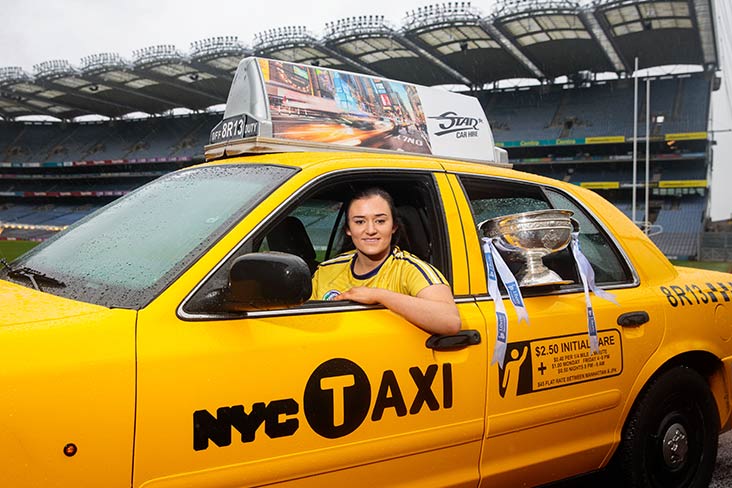 Vinny Healy would bring his daughter to the pitch as he took charge of training the St. Thomas Camogie squad.

It became a routine the little one lived for and when on occasion the weather was deemed too brutal to subject her too she would make a burst for it, like a convict breaking out of prison. Once the safety of the car was reached, there was no chance of reversing the course. A tantrum would force Vinny to yield.

But she was always precocious, and in a hurry, playing as soon as was feasible at all, quickly flying through the ranks at club and county level.

16 years after her introduction to the joys of Camogie, Healy is an All-Ireland Senior Camogie Championship winner, and an All-Stars goalkeeper.

This is despite the fact that she plays outfield for St. Thomas, a dead-eye freetaker who helped the side – still managed by Vinny – reach the Galway Senior Camogie Final, although they fell short to Sarsfields last Saturday week.

“Dad was the manager of the Camogie team” Healy regales of her introduction, as told to her.

“When I was three years old I used to go the pitch when they were training. Sometimes when the weather was really bad and raining they wouldn’t let me go, I would sneak out in between their legs and jump in the car. They had to let me go because I wouldn’t get out of the car, I would have a fit.

“I was there since I was three and all the way up. I think I was playing Under 10 when I was six. I might have just been on the sideline. I actually asked the manager could I go training.”

Listening to her speak with such passion about Camogie, and such seriousness about her preparation – the 19-year-old was still a Leaving Cert student when Galway claimed National League honours last March - it is no surprise that she is getting ready to board the flight to New York as part of the Liberty Insurance Camogie All-Stars Tour party tomorrow morning.

“Winning an All-Star is a nice representation of what you did throughout the year. It is a great honour being the best in that position in that year. That is the way I would look at it. It is an honour.

“Going to New York is always great. It is great for Camogie in general. This year was probably the best year for Camogie and the Camogie Association with the record attendance at the Final. This trip and the match being live streamed is only going to boost it even more. To get more people at the matches, they have to see it. Now you have people from different countries seeing it as well and it is only going to be a positive for Camogie.”

The whirlwind of emotion and celebration in the wake of last September’s victory over Kilkenny meant that Healy didn’t get the time to process the magnitude of the feat for a while.

Her contribution had been significant, with huge saves against Waterford in particular in the Quarter-Final, when the westerners were in arrears in the second-half. She came up with the goods too in the Semi-Final win against Cork, when an early penalty miss might have chipped away at a more brittle temperament.

When called upon in the decider, the teenager excelled again but her contribution has been about even more than the stops, the length and accuracy of her puckouts a pivotal part of the overall game plan hatched by Cathal Murray and his fellow mentors.

Already in her third season in the number 1 jersey, having succeeded the long-serving Susan Earner after her retirement in 2017, Healy was a shoo-in for a first All-Stars Award and is looking forward to the All-Stars Tour.

“It has sunk in now that we won the All-Ireland and what a great year it was. I have watched the match a couple of times back. I don’t think it sunk in at the very start. It was the night after the All-Stars. It just hit me. So I watched the game back that night. I watched it in a different way.

“In a match you nearly forget what you did 20 seconds ago because it is no good to you, next ball next ball. You can’t change what you did a minute ago, 10 minutes ago.”

The mental toughness of the team in the last 10 minutes as Kilkenny threw the kitchen sink at them is what stood out more than anything to the St. Thomas’ custodian – though she plays outfield for the club.

It was evident in the aftermath that the questioning of their bottle at the end of narrow defeats in previous season had irked the more experienced players especially. But it was acknowledged that they had failed to come out on the right side of too many tight games.

“We just talked about, from the very start, that we can’t let another year pass us by. In fairness to everyone it wasn’t a lot, it was a point or two points over the years. But this year we said from the very start it wouldn’t happen again.

“We took on the League as if it was Championship. We needed to start winning big matches on the big stages. We attacked the League and did well in that. Went onto the Championship and grew in confidence. The management had us well prepared for every match. When you go into a match and you are well prepared you are automatically 10 times more confident than you would be.”

She smiles when her own form is mentioned, the individual season-defining big plays as well as the quality of her overall contribution. But her work with the backs, particularly skipper and full-back Sarah Dervan is critical to the entire effectiveness.

“The full-back line it has been very strong all year. Me and Sarah have a good relationship. If I tell her to move left she will go left, if I tell to move right she will go right. But even the half-back line. I might have won the All-Star because I didn’t have that much to do and that is because they are working out the field.”

Playing in Gaelic Park on Saturday as a member of the Cathal Murray-managed 2019 All-Stars against the 2018 crew led by Paudie Murray, will be memorable but getting to step onto Croke Park was what she had dreamed of from those baby steps at St. Thomas’.

“I was able to go and enjoy it. I didn’t let the nerves take over me. I just went out like any other match, though I realised that I was playing in an All-Ireland Final in Croke Park. It is what I wanted to do when I started, so I had to go out and enjoy it.”

The rewards continue this week