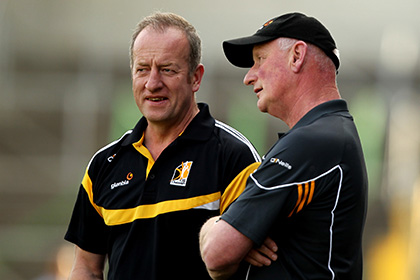 Brian Cody has been confirmed as Kilkenny senior hurling manager for a 22nd year but long serving coach Michael Dempsey has stepped aside.

Cody was ratified following a county board meeting tonight with DJ Carey announced as a selector alongside James McGarry with Michael Comerford the Strenght and Conditioning Coach.

In a statement this evening Kilkenny GAA said: "Kilkenny GAA would like to take this opportunity to thank Michael Dempsey for his contribution to GAA in Kilkenny.   Michael Dempsey joined Brian Cody in the senior management team in 2005 and has since being a constant presence behind the scenes, no more so than during Kilkenny’s four in a row from 2006-2009 and also in Kilkenny’s All-Ireland successes in 2011, 2012, 2014 and 2015.  On behalf of Kilkenny GAA and Brian Cody we wish Michael all the best in the future and to thank him for his immense contribution to hurling in Kilkenny."

At U-20 Derek Lyng has been ratified as manager, with Peter Barry and Michael Rice as his selectors.

At U-17 Richie Mulrooney has been ratified as manager, with Adrian Finan, Marin Carey and Sean Kelly as selectors and the team trainer for 2020 will be James Meagher.