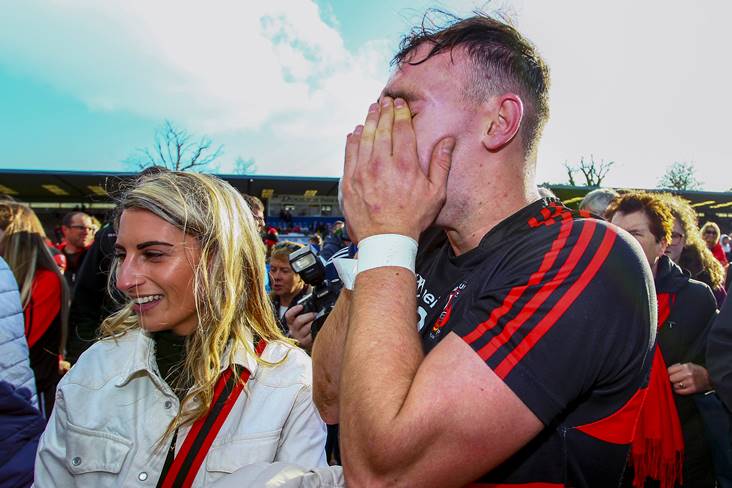 An emotional Dessie Hutchinson after helping Ballygunner to a six-in-a-row of Waterford SHC titles. NPHO/Ken Sutton.

The joy and despair of county finals - It was an action-packed Sunday on the club scene...

Well if the first half of the County Final was explosive from St Lomans ... then the second half was electric from Garrycastle!!! pic.twitter.com/pm6bP2dnln

As a result of inclement weather overnight and following an inspection of the pitch and grounds this morning. In the interest of players and supporters, today’s @louthgaa Senior & Minor Finals have been POSTPONED. Refixture details TBC@NewtownBlues @naomhmairtin @thejoesgfc

#WicklowGAA #GAABelong What an atmosphere in the Aughrim changing room of a winning championship team. Is there anything like it. Memories being made to treasure
BOOM AND PLATFORM HIRE
SENIOR FOOTBALL CHAMPIONS 2019
ST.PATRICKS WICKLOW TOWN pic.twitter.com/J0obavWL6G

Comhgairdeas to Tooreen, 2019 Mayo Club SHC Champions.
The men from East Mayo defeated Castlebar Mitchels in what was a close match. They will now play Four Roads of Co. Roscommon in the Connacht IHC. #mayogaabanter #gaa #tooreengaa pic.twitter.com/ueVRDZ4Sw1

Is this the largest football support sign in Ireland? It’s erected outside Manorhamilton in support of the local @glencarmanorgaa in today’s Leitrim senior final. Note height of it in relation to telephone pole. Apparently size matters, they won. pic.twitter.com/cVlqfcD6XG

Congratulations to Portlaoise on their 34th SFC title and third title in a row.

It puts them joint-first in Leinster and joint-fourth in the 32 counties for SFC titles.

It was a tension-filled game, but had plenty of good football.

The strength of our community was never more evident than in the last 24 hours. As both my son and my brother were on the @enniskerryGAA team I would personally like to thank everyone for support. I urge everyone to respect peoples privacy at this time. Thank you.

Congratulations to Padraig Joyce and his backup team. Best of luck to Galway Senior Football and let’s hit the ground running in the New Year. The entire county is behind them. https://t.co/lBbkN0kXnN

Sweat Sweat point by the Genius TJ Reid. Who scored 1-12 for Ballyhale Shamrocks as they came from 7 points down in the Kilkenny Quarter Final to Beat Clara by 1-19 to 0-17 pic.twitter.com/vCvnDNla2v

Cian Johnson with two second half goals for Ferbane as they win their first Offaly title in a quarter of a century. Achieved everything at underage level and then scores 2-3 from play in a senior final. Baller 😎

Excellent county final in Down today, Warrenpoint produced a really solid display and will rue the open goal chance with 8mins to go but Kilcoo's experience last 10 minutes seen them over the line, Paul Devlins link play with Jerome Johnston last ten minutes a joy to watch!

Davy Fitz trained Sixmilebridge the evening before his wedding and again the morning after his wedding...there is no secret as to why he's a serial winner, no short cuts, All IN #DavyFitz

The moment @Castlerahan_GAA were confirmed as @CavanCoBoardGaa SFC Champions for a second year in a row. 👏🏻 pic.twitter.com/7ZrOTEhgps

Well done to Clonguish Gaels on regaining the JJ Duignan Cup for the first time since 2012, and to Joe O Brien the worthy man of the match award winner pic.twitter.com/lCcdZCHr8k