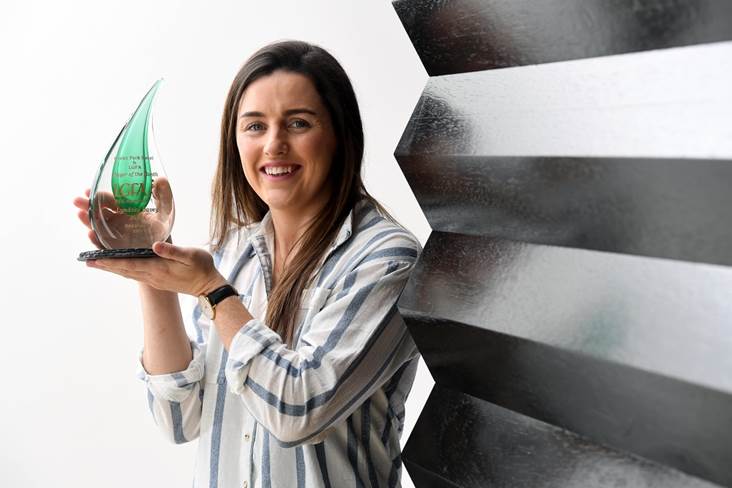 Dublin footballer Lyndsey Davey with The Croke Park/LGFA Player of the Month for September Award at The Croke Park Hotel in Dublin. Photo by Matt Browne/Sportsfile

Dublin forward Lyndsey Davey has been honoured with The Croke Park/LGFA Player of the Month award for September.

Long-serving Davey, 30, from the Skerries Harps club, has been rewarded for a Player of the Match performance against Galway in the TG4 All-Ireland Senior Final.

Davey sparkled in difficult conditions at Croke Park on September 15, in front of a record 56,114 attendance, as the Sky Blues lifted the Brendan Martin Cup for a third successive season.

The firefighter with the Dublin Airport Fire Service opened the second half scoring with a classy point, before setting up a crucial 39th-minute goal for Hannah O’Neill with some typically industrious work.

A member of the Dublin senior panel since making her inter-county debut in 2004, Davey is now the proud holder of four TG4 All-Ireland Senior medals, and she’s also been honoured with four TG4 All Star awards.

Davey enjoyed another tremendously consistent TG4 Championship season with Dublin, scoring 2-7 along the way as Mick Bohan’s side triumphed once again.

Lyndsey was presented with her award today by Alan Smullen, General Manager, The Croke Park.