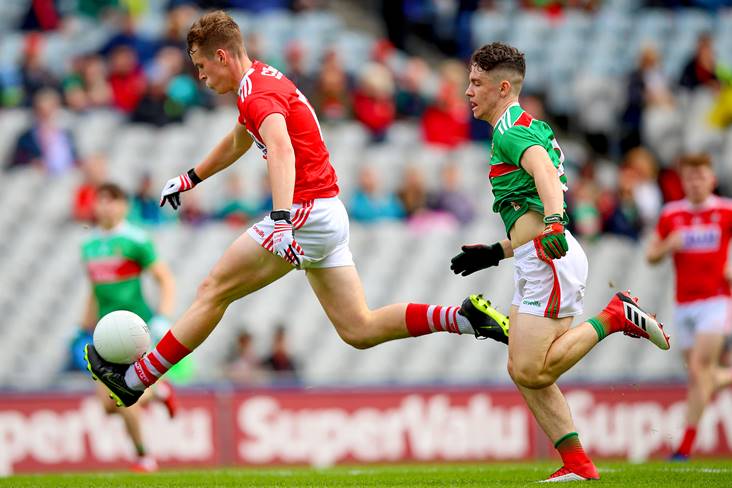 Captain Conor Corbett bagged 2-3 as Cork defeated Mayo at Croke Park to qualify for their first All-Ireland MFC final since 2010.

Patrick Campbell and Daniel Linehan also netted as the Rebels cut loose in the final quarter. Having captured the All-Ireland U20 title seven days ago, Cork are now just 60 minutes away from a famous underage double. They will aim to end a 19-year wait for Tom Markham Cup honours when they face the winners of tomorrow's second semi-final between six-in-a-row chasing Kerry and Galway in the decider on September 1.

Cork led by 1-7 to 0-7 at half-time, but Mayo reduced the gap to two before the winners pulled away in the final quarter with goals from Linehan and two from Corbett. Corbett's second major came in injury-time after Niall Feeney had lobbed a consolation goal to the net for Mayo moments earlier.

Mayo hit five goals in an impressive quarter-final win over Dublin, but they were put on the backfoot by Campbell's goal in the seventh minute after Jack Cahalane had pounced on a poor kickout. Cahalane passed up on another goal chance two minutes later before Hugh Murphy blasted over with a goal at his mercy in the 14th minute. Further points from Murphy and Corbett had the Rebels perched on a 1-7 to 0-4 lead after 25 minutes, but Mayo grabbed the last three scores of the half, including two from the excellent Paddy Heneghan, to trail by a goal at the interval.

The Westerners reduced the deficit to two points on the restart before Linehan powered through for a cracking Cork goal in the 46th minute. The Munster runners-up never looked back after that as Corbett raised two more green flags in the 50th and 65th minutes, either side of Feeney's late effort for Mayo.