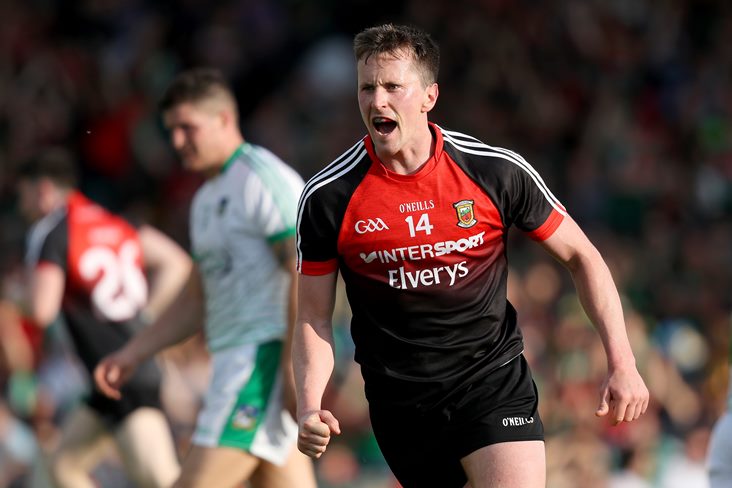 By John Fallon at the Gaelic Grounds

It was a night for breaking records at the Gaelic Grounds as Mayo got their 2018 qualifier campaign up and running in style.

This was their biggest win ever in the qualifiers and their all-time top scorer Cillian O'Connor amassed a haul of 3-9, the biggest he has hit in a championship game for the Green and red.

They led by 1-10 to 1-1 at the interval and then they showed grseat appetite to finish strongly and record their biggest ever win in the qualifers.

An early goal from a penalty by Sean McSweeney after four minutes suggested an upset but O'Connor cancelled it with three excellent points from play.

Limerick goalkeeper Donal O'Sullivan did well to keep his line intact but he could do little to prevent O'Connor getting his first goal five minutes from the interval.

Mayo introduced 2016 Footballer of the Year Lee Keegan for his first action since being injured in the league against Tyrone and he looked sharp from his introduction.

Limerick sub Seamus O'Carroll also impressed and a goal from the Castleknock player cut the gap to 1-14 to 2-4 going into the final quarter.

The sides twice exchanged points but then Mayo turned on the style and hit 4-3 without reply in a devastating eleven minute spell.

O'Connor struck for two goals in three minutes and then set up Andy Moran for a goal after he had come on.

The current Footballer of the Year then added a second goal as Mayo turned the screw.

Limerick at least had the final say with a goal from a penalty by O'Carroll.

At that stage though ten Mayo players had scored and the possibility of another summer odyssey through the back door was up and running.

Cavan boss Graham to be given two-year extension