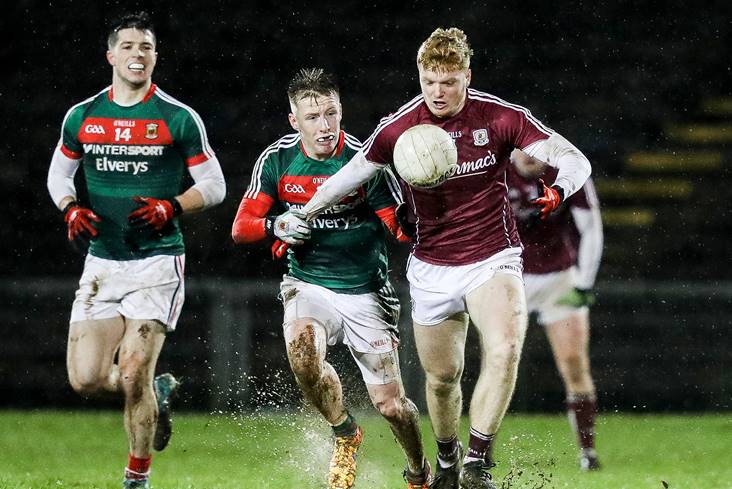 Galway finished with 12 men but still managed to pick up their second win of the season at Mayo's expense in tonight's re-fixed FBD League clash in Castlebar.

Played before a crowd of 2,679 at a wet and windy MacHale Park, Damien Comer, Sean Mulkerrin and Sean Andy O Ceallaigh all saw red for the Tribesmen in the game's second-half when the visitors turned around a five-point deficit early in the restart to win out by the minimum.

Still seeking their first win of 2018, Mayo looked on course for it when Peter Naughton fired in their goal on 39 minutes to give his team a 1-8 to 0-6 lead.

Their neighbours responded in kind however through a deflected strike from sub Comer and quick points via the same man and Barry McHugh proved the winning of the game, as Stephen Rochford's men failed to make the most of a numerical advantage which kept on going in the closing 15 minutes of the game.

Kevin McLoughlin had the hosts up and running inside three minutes with a well-struck point off the outside of his boot. The Knockmore clubman was one of three late changes for Rochford, replacing Neil Douglas at centre-forward, while Alan Freeman and Adam Gallagher came in for Fionn McDonagh and Ger McDonagh, respectively.

Patrick Sweeney made it a point apiece soon after McLoughlin's opener before a brace from Shane Nally at the far end restored the Heather County's advantage and then doubled it.

Paul Conroy and Eamonn Brannigan raised white flags to even up the sides again prior to McHugh pointing the first Galway lead through a free a minute shy of the quarter hour mark.

Last year's beaten All-Ireland finalists dominated the next 15 minutes on the scoreboard though, notching three points via Moy Davitts full-forward Brian Reape (2 frees) and another placed ball from McLoughlin to usher themselves three in front.

Conroy hit back with his second point for the men in maroon but it was erased once McLoughlin swung over another off a splendid feed from Ryan O'Donoghue.

A second free from McHugh closed the half at 0-8 to 0-6 in Mayo's favour and they'd resume matters in the best possible fashion with a brilliantly taken goal from the lively Naughton, who was ice cool with his finish.

Back-to-back points from Padraic Cunningham limited the damage for Kevin Walsh's charges and come the 50th minute the sides would be all square after Sweeney's deflected shot flew past David Clarke in the Mayo goal.

The fortunate strike had come off a sensational run from Conroy and brought the game to life with familiar faces such as Comer and Diarmuid O'Connor being introduced to each attack just minutes beforehand.

McHugh (free) and Comer soon put Galway into their first two-point lead but the latter's night would be short lived after he was issued a straight red card. Three minutes later and the leaders were down to 13 when debutant Mulkerrin picked up a black card on top of a caution the former county minor captain had received 10 minutes in.

It was going to be a 'hold on' job for the visitors from there and they dually did despite another point from Reape putting the pressure on shortly after O Ceallaigh's dismissal in the third minute of injury-time.