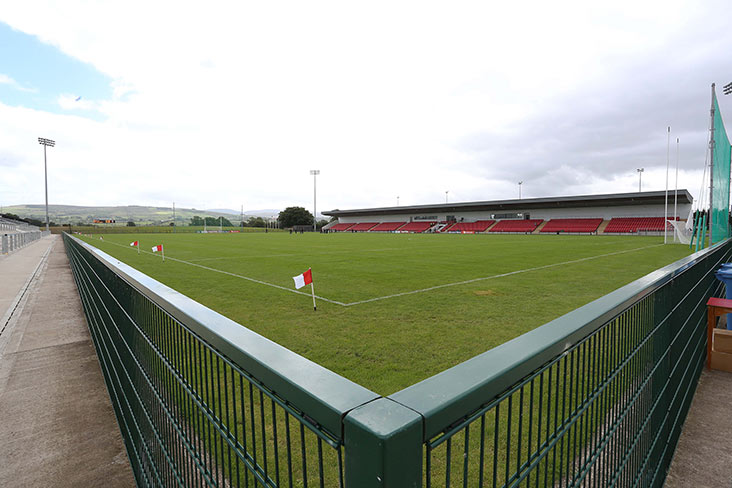 Tyrone, Derry, Fermanagh and Monaghan are into the Ulster MFC semi-finals

Ruairi Canavan struck two late points as Tyrone edged out Donegal in Ballybofey to move into the semi-finals of the Ulster minor football championship this afternoon.

It finished 0-8 to 0-7 at MacCumhaill Park, where the visitors landed three points in the closing quarter to snatch victory.

Conor O’Neill’s converted mark saw Donegal lead by 0-4 to 0-3 at the half and they’d be two to the good early in the restart before a Canavan brace tied things up.

Blake McGarvey nudged the home side back in front on 40 minutes before a Harry Morgan ‘45’ and a superb point from Canavan sent the Red Hands on their way.

It sees Tyrone now take on Derry in the Ulster semi-finals on the weekend of January 2/3 after the Oak Leafers edged Armagh by 1-7 to 0-8 in Owenbeg.

Two late frees from Matthew Downey were what got Derry over the line against the Orchard men, having trailed by 0-4 to 0-3 at the break.

Armagh held their one-point lead until the 10th minute of the restart when Dan Higgins crashed a close range shot into their net.

The visitors got level by the second water break (1-5 to 0-8) but couldn’t find any more scores as Downey's late brace sealed Derry’s berth in the last four.

In Enniskillen, Fermanagh scored a 0-10 to 1-4 win against Down to usher themselves into the last four.

Down edged a better start at Brewster Park in the opening minutes but fell behind once scores Conall Boyle and Ronan McCaffrey sailed over, giving the hosts a 0-3 to 0-2 lead at the water break.

Down’s Oran Cunningham would pick up a black card minutes into the resumption and from there the Ernesiders opened up a five-point lead via the points of Ronan McGovern, Conor McGovern, Conall McGovern and Fionan O’Brien to lead by 0-7 to 0-2 at the interval.

The Mourne lads got right back into contention at the start of the second-half with a goal from Niall Toner but they didn’t push on, going down to 14 men instead, as a pair of O’Brien points ensured Fermanagh a place in the semis alongside neighbours Monaghan early in the New Year.

Having edged Cavan with a last minute goal in the preliminary round two months ago, the Farney men were impressive in a 2-17 to 0-8 win against Antrim today at Corrigan Park.

James Slevin’s goal helped Monaghan to lead by 1-6 to 0-4 at half-time and after the turnaround they’d be in relentless form.

The victors would slam home their second goal with 10 minutes to go as they went on to round off a 15-point victory in west Belast.