Ladies: Flood on the double as Louth cruise into decider 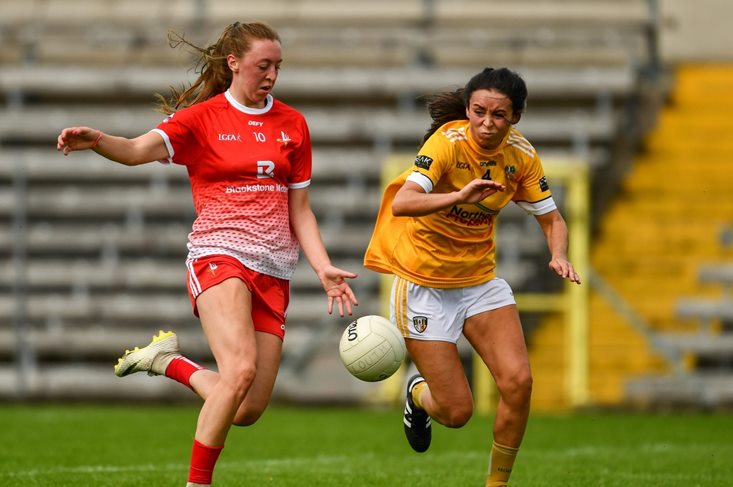 Kate Flood led the way with a magnificent haul of 2-6 to power Louth to a convincing triumph over Antrim in the TG4 All-Ireland Junior Football Championship semi-final at sunny St Tiernach’s Park, Clones.

Following last year’s final defeat to Limerick, the Wee County will now be determined to go one step further at Croke Park on September 15.

In a tense opening to the contest, Louth skipper Kate Flood traded frees with Antrim’s Cathy Carey. The Saffron attacker subsequently had a couple of efforts that fell short and Lara Dahunsi also miscued a shot at a left-hand angle.

By contrast, Louth were much more efficient when it came to converting scoring opportunities. Rebecca Carr, Flood (two) and Niamh Rice (two) all found the target in succession to give their side a healthy five-point cushion.

However, Antrim gained a lifeline on 19 minutes, when Dahunsi fired to the net after capitalising on hesitancy in the Louth defence. Sean O’Kane’s charges proceeded to cut the gap to a bare minimum, only for their Leinster counterparts to regain control just before the interval.

Courtesy of unanswered points by Susan Byrne, Eimear Byrne and Carr, Louth brought a 0-10 to 1-3 buffer into the dressing rooms.

Antrim suffered a major set-back just after the resumption as a serious injury forced team captain Saoirse Tennyson out of the action.

Even though the Ulster contenders briefly narrowed the gap through a routine Carey free, centre-back Michelle McMahon and the increasingly-impressive Carr ensured Louth remained in the driving seat.

Darren Bishop’s outfit then created additional daylight on the third-quarter mark, when Flood delivered a cool finish to the back of the net. Antrim looked set for a late lifeline when they were awarded a penalty in the 49th-minute.

But Louth goalkeeper Una Pearson was equal to Orla Corr’s strike and thanks to a superb major for Lauren Boyle at the opposite end, the tie was placed beyond doubt.

Flood capped an outstanding individual performance with her second goal in the dying stages as Louth set out a statement of intent ahead of their latest appearance in the All-Ireland final.