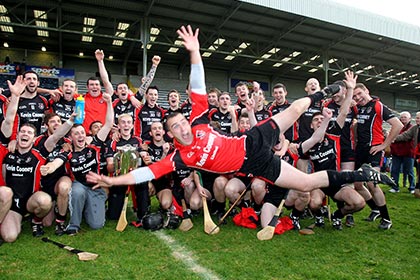 Oulart-The Ballagh made history yesterday when claiming a fifth Wexford SHC title in a row against St Aidan's, Ferns at Wexford Park.

Early goals from Rory Jacob and Nicky Kirwan sent Martin Storey's men on the road to victory but, to their credit, Ferns, who were contesting their first final since 1969, overcame those early set-backs to make a contest of it.

The underdogs outscored Oulart by 0-9 to 0-2 between the fourth and 29th minute and went in at the break with a two point lead.

However, Oulart made the most of wind advantage in the second half to grind out a deserved victory.

Kirwan netted his second goal in the 41st minute but his effort was cancelled out by Ferns shortly after when a long delivery by Paul Morris caught Oulart goalkeeper Ben O'Connor off guard.

The sides were level entering the last minute of normal time but points from Michael and Rory Jacob edged Oulart over the line.